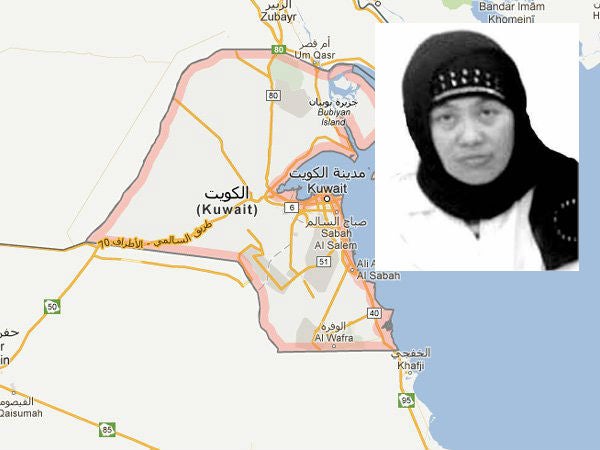 The Labor Department is studying a ban on the deployment of domestic workers to Kuwait following the execution of Filipino Jakatia Pawa (inset). (Photo from Migrante KSA via Radyo Inquirer)

The Department of Labor and Employment is mulling the suspension of deployment of Filipino household workers to Kuwait.

This followed last Wednesday’s execution of a Filipina worker convicted of killing her employer’s daughter in 2007.

Labor Secretary Silvestre Bello III said they would consult with other government agencies and stakeholders on the implementation of a moratorium.

He noted that there were growing calls for a moratorium due to the abuses experienced by overseas Filipino workers, especially female household workers.

“We are taking this call for a moratorium seriously. We will make a decision on the proposed moratorium soon,” said Bello in a statement.

Bello, who was in Rome for the third round of formal peace talks when Filipina Jakatia Pawa was executed, immediately flew to Kuwait to check the status of another Filipino on death row.

The other Filipino on death row was identified as Elpidio Lano, who was convicted for killing another Filipino.

Bello said they were carefully considering the proposed moratorium on the deployment of household service workers, as they did not want it to be misconstrued as a retaliatory act.

“Our OFWs leave the country with the promise of a better life for their families, unfortunately they are confronted with their worst nightmare in these countries,” he said. CBB

Read Next
The alternative universe of Donald Trump
EDITORS' PICK
Eleazar: PNP open to ICC probe but PH judicial process is working
P258M shabu seized, Chinese national arrested in Manila drug bust
Gilas out to prove Korea win not a fluke; Tab fires back at ‘lucky shot’ remark
SANTIS Delicatessen: The road to survival is sweet and savory
Man wounded as raid on illegal cockfight in Isabela leads to shootout
Piolo Pascual: The Ultimate Heartthrob continues to level up
MOST READ
Palace: Face shields no longer needed to be worn outdoors
Lacson or Pacquiao a possible presidential candidate for NPC – Sotto
PAL to ax some long-haul flights to slow bleeding
Duterte declares face shields still mandatory indoors and outdoors
Don't miss out on the latest news and information.