Environmental group Kalikasan People’s Network for the Environment (Kalikasan PNE) on Tuesday trooped to the Chinese Consulate in Manila to protest the continuous construction of military bases in the West Philippine Sea (South China Sea).

Clemente Bautista, Kalikasan PNE national coordinator, said the installation of missile systems across the Spratlys islands was “not only provoking tension but also worsening the degradation of marine ecosystems that is home to over 30 percent of known coral reef expanses across the world.”

“Reefs, not rockets, should be proliferating in the ecologically critical waters of the West Philippine Sea… Operating military bases are also known sources of polluters, as transport fuel, toxic or hazardous war materiel, and other harmful impacts generated by their operations routinely pollute their surrounding environment,” Bautista said. 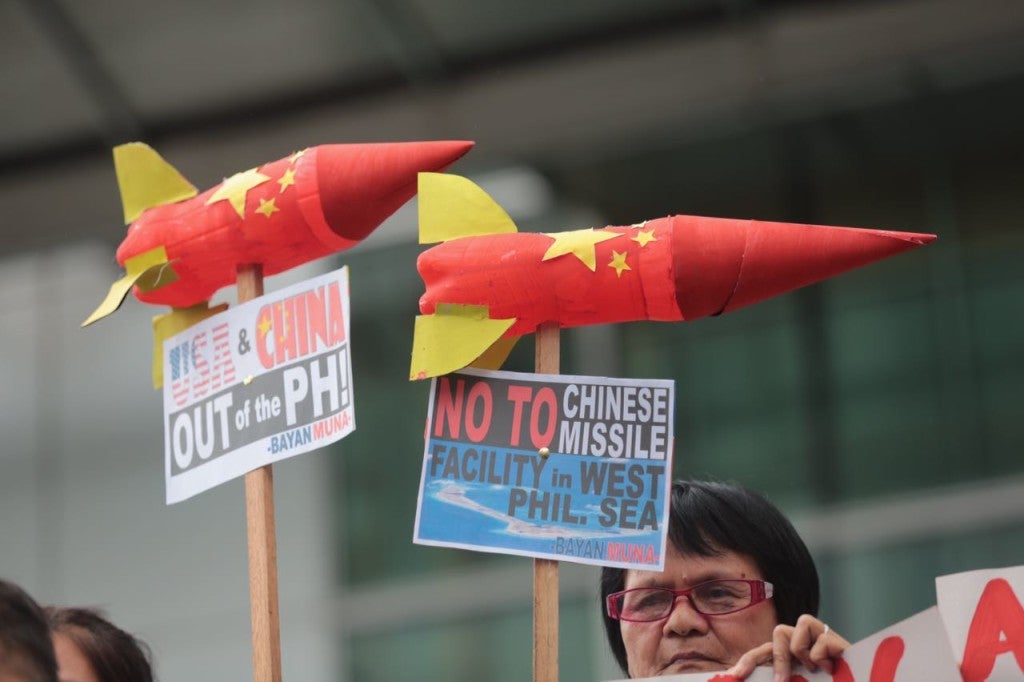 Environmental activist protest outside the Chinese consulate on monday, january 25, 2017 to condemn the continuing construction of missile bases across various reefs in the spratlys island in the west ph sea. INQUIRER/Grig C. Montegrande

“Aside from its ecological effects, militarization in the West Philippine Sea increases the possibility of armed confrontation between different military forces,” he added.

US think tank Center for Strategic and International Studies reported that Beijing appeared to have placed anti-aircraft guns and anti-missile weapons systems designed to guard against attacks on all of its man-made islands in the South China Sea.

Foreign Secretary Perfecto Yasay said the Philippine government had filed a low-key diplomatic protest with China regarding the matter.

“The seven military outposts of China across West Philippine Sea has put crosshairs on its various ecosystems and fishing grounds. Even with China’s declaration that Filipino fisherfolk can now return to the various traditional fishing grounds across the disputed waters, it is unsafe to fish in an area where tensions could lead to armed conflict,” Bautista said.

“If China wants peaceful diplomacy, it should stop expanding military installations in West Philippine Sea and instead focus on coming together in a multilateral agreement with the different claimant countries on sustainably managing the region’s marine resources, promoting scientific research and development, and ensuring peace and respect of sovereignty in the troubled waters,” he added.

The Philippines last year scored a historic victory in its arbitration case against China, which rejected Beijing’s claim to almost all of the South China Sea. In a major turnaround in diplomatic policy, President Rodrigo Duterte had taken steps to mend the country’s strained ties with China, including upcoming bilateral talks. IDL