Duterte urged: Reopen probe into US role in Mamasapano 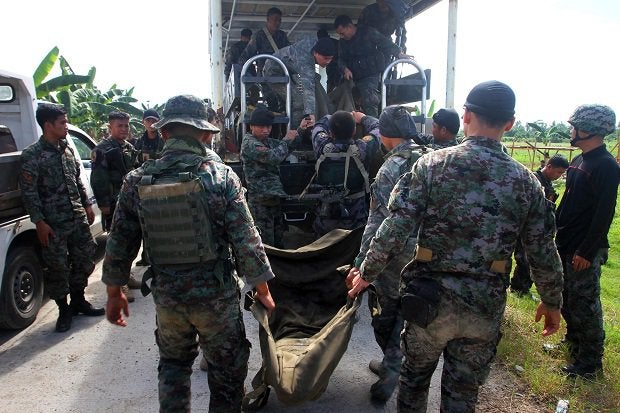 Philippine police commandos load body bags containing the remains of their comrades killed in a clash with Muslim rebels, onto a truck in the town of Mamasapano, on the southern Philippine island of Mindanao on January 26, 2015. AFP PHOTO / Mark Navales

Two years after the bloody incident, militant group Bagong Alyansang Makabayan (Bayan) has called on President Rodrigo Duterte to reopen the investigation on the role of the United States in the botched Mamasapano operation that led to the death 44 Special Action Force (SAF) commandos.

Bayan said Duterte must ensure that Mamasapano will never happen again, noting that US intervention and militarism were “never the solution” to achieve genuine peace in Mindanao.

READ: Duterte to meet with SAF 44 kin on eve of massacre’s 2nd anniversary

“We call on President Rodrigo Duterte, who has vowed to pursue an independent foreign policy, to reopen the probe into the true extent of the US role in Mamasapano. It has been confirmed that the US was present and involved on the ground during the operation. How Aquino allowed a foreign government to direct a domestic police operation should be thoroughly investigated,” Bayan said in a statement.

“He must expel US troops based in Mindanao. He must break away from the US- led war on terror. Even now, in the face of threats from the Abu Sayyaf Group, Maute and other similar groups, the military has sought the involvement of the US. Such moves seem to be oblivious to the bitter and tragic lessons of Mamasapano. Such proposals run counter to Duterte’s independent foreign policy,” the group added.

READ: Duterte: Why were air assets not used in Mamasapano?

Duterte is set to meet with the families of the slain police officers at Malacañang’s Heroes Hall for a dialogue. Last week, the commander in chief said he would like to talk to the widows and police officials regarding “disturbing issues” surrounding the botched operation.

The failed “Oplan Exodus” operation targeted bomb-maker Zulkifi bin Hir, alias “Marwan,” who had a $5-million bounty on his head offered by the US government.

Former President Benigno Aquino III, who had claimed responsibility for the incident, was charged by anticrime watchdog last year with reckless imprudence resulting in homicide over his alleged role in the operation. JE