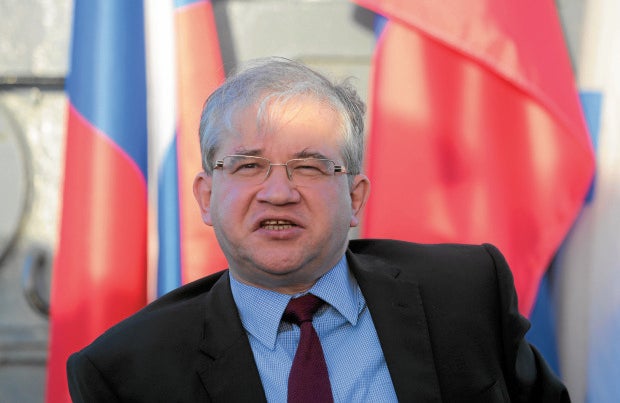 Russia said it will not take sides in the South China Sea dispute but instead called for a peaceful resolution which includes abiding with the international law.

“We won’t take sides in these disputes. But as a member of the UN Security Council, the Russian Federation has been speaking in favor of exclusively peaceful solution of these disputes. No use of threats or threats to use force is acceptable,” Russian ambassador to the Philippines Igor Khovaev told reporters in a press conference late afternoon Wednesday aboard Admiral Tributs, one of their navy vessels in a five-day visit to Manila.

The Philippines, China, Vietnam, Taiwan, Malaysia and Brunei have competing claims over the resource-rich South China Sea, which had been a source of tension in recent years.  China asserts its claim based on the nine-dash line, while the Philippines won an arbitration case last July.

China has refused to recognize the court’s ruling. It has continued building artificial islands and military exercises in the South China Sea.

Khovaev said that all the parties involved in the dispute must sit down together and talk as soon as possible.

“There is no alternative to negotiations. Of course the solution to these disputes should be mutually acceptable and be based on international law including the UN Sea Law Convention of 1982. That’s our consistent fundamental position,” he said.

Asked about China and Russia’s joint exercises in the South China Sea in September last year which involved several warships, submarines and planes, Khovaev said it was not held in disputed territories and it was not political in nature.

“These are organized on regular basis. In previous years they took place in East China Sea. Last time it was organized in the South China Sea area which has nothing to do with the disputed islands,” he said.

Khovaev said they are also open to possible naval exercises in the South China Sea with the Philippines, China and Malaysia to combat terrorism and piracy.

In the same press conference, the ambassador expressed Russia’s desire to build a defense cooperation that will “combine efforts” to fight common threats like terrorism, piracy and illegal drug trafficking.

President Rodrigo Duterte has repeatedly expressed interest in establishing an alliance with Russia, as he threatens to shift from the international ties with the Philippines’ longtime ally, the United States, which has criticized his war on drugs. He is also turning to China and Russia for arms and technology. RAM