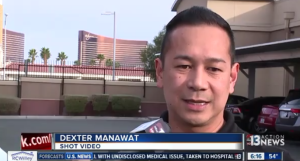 A Las Vegas woman was filmed hurling racist insults at her Filipino-American neighbor.

“You’re like orange savages,” she said while sweeping the leaves. “Orange motherf***er, go back to where you came from!”

“Where did I come from?” Manawat asked the woman, to which she said that Manawat and other Filipinos in the United States came “from some piece of s*** Manila-a** f***ing ghetto living under a tarp piece of s*** land” and “one f***ing generation out of the jungle.”

Manawat posted the video on Facebook, which became viral with thousands of likes and shares. “This, on New Year’s Eve, when all you hope for is that evil would rid of itself,” Manawat reportedly captioned his clip.

However, he took down the video and penned a post in replacement. “As much as many say she deserves this, I don’t believe violence or physical harm is the answer. I say that because there were a lot of people actively looking for her. Instead of looking for her, we need to pray for her. Pray that God softens her heart,” he wrote.

In an interview with the news site, the woman apologized to the Filipino-American community. She elucidated that she and Manawat never spoke for years because of her frustrations, but she never intended to disgrace Filipino-Americans as a whole.

“I stooped to the lowest possible denominator to hurt someone because I was angry,” she said. Both said that they were willing to reconcile their differences and forgive each other.  Gianna Francesca Catolico