The Russian Navy is considering joint exercises with its Philippine counterparts that will focus on solving piracy and terrorism.

“The Philippine Navy needs some help, we will help. The problem here is terrorism and piracy. You have the task to fight this problem and we will show you what we can do,” said Eduard Mikhailov, deputy commander of Flotilla of Pacific Fleet of Russia, said on Tuesday.

“We will do our best from our side to help you,” he said through an interpreter.

The Russian Navy Vessels Admiral Tributs, a large anti-submarine ship; and Boris Butoma, a large sea tanker, arrived on Tuesday for a goodwill visit to the Philippines. The vessels will stay here until Saturday.

This is the third time a Russian navy vessel visited the Philippines. The five-day visit will include a series of confidence building engagements between Philippine Navy and Russian navy personnel. Tour to historical places within Manila and Cavite area, wreath laying ceremony, capability demonstration, open house to all civilians, shipboard tour aboard Russian vessels, receptions, goodwill games and send-off ceremony are also scheduled.

President Rodrigo Duterte has expressed interest of establishing an alliance with Russia.

“We’re very sure that in the future we’ll get such exercises with you, maybe just the maneuvering or maybe use some combat systems and so on,” Mikhailov said.

Mikhailov also raised the prospect of joint exercises with China and Malaysia in the South China Sea, where competing territorial claims have been a major source of tension and potential conflict for decades.

“We really hope that in a few years, the military exercises for example in your region, in the South China Sea, will (involve) for example, not only Russia-Philippines, but Russia, Philippines, China and maybe Malaysia together.”

The visit was only the third ever by Russian military vessels to the Philippines, according to the Filipino Navy’s Commodore Francisco Cabudao, who led the welcoming ceremony for the Russian ships.

The Philippines, a former American colony, had for decades been one of the United States’ most important and loyal allies in Asia. The two are bound by a mutual defense pact.

But Duterte, a self-described socialist, has during his six months in power sought to dramatically shift his nation’s foreign and military alliances towards China and Russia.

Duterte has made repeated threats to downgrade or even end military and diplomatic ties with Washington. He has put on hold the dozens of war games held annually with the United States, and said he wants all American troops to leave the Philippines.

The animosity followed US President Barack Obama’s criticism of Duterte’s brutal war on drug crime that has left thousands of people dead in the Philippines. 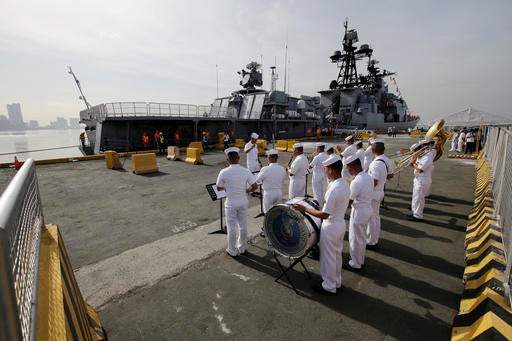 During a trip to Beijing in October last year, Duterte enthused about his plans to forge closer ties with Russia and China.

“America has lost. I’ve realigned myself in your (Chinese) ideological flow and maybe I will also go to Russia to talk to (President Vladimir) Putin and tell him that there are three of us against the world: China, Philippines and Russia. It’s the only way,” he said.

Philippine officials have said Duterte is expected to visit Russia in April or May. Duterte has said he is open to the Philippine military holding joint exercises with Russia and China. With a report from Agence France Presse

Read Next
Filipino couple’s vocation to help challenged in US
EDITORS' PICK
House energy committee chair Arroyo bats for cheap electricity
Authors unbowed after gov’t ‘purge’ of books
A laptop that maximizes your WiFi so you can maximize your productivity
Red-tagged green activist recalls imprisonment
Powered by style, innovation and passion
‘FPJ’s Ang Probinsyano’ officially ends after nearly 7 years
MOST READ
‘FPJ’s Ang Probinsyano’ officially ends after nearly 7 years
Arjo Atayde reveals proposal to Maine Mendoza was ‘more than a year’ in the making
Pagasa: Cloudy Saturday with possible rain showers; LPA spotted outside PAR
Angelica Panganiban, Camille Prats recall ‘trauma’ of being called out for weight gain in ‘G-mik’
Don't miss out on the latest news and information.