US says it will work with Duterte after latest outburst 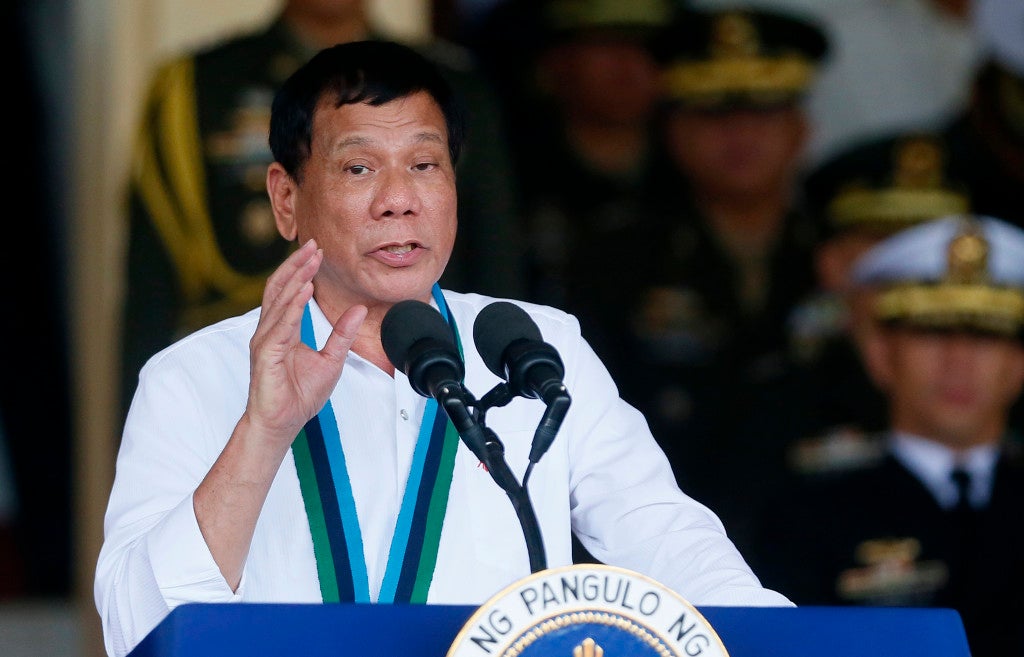 The United States said Sunday it will work with the Philippine president to address any concerns after he threatened to terminate a pact that allows U.S. troops to visit the Philippines.

President Rodrigo Duterte was enraged after a U.S. government aid agency deferred a vote on a renewal of a major development assistance package for the Philippines over concerns about extrajudicial killings in Duterte’s war on illegal drugs, which has left thousands dead.

Although no decision on the aid package has been taken, Duterte on Saturday launched an expletives-laden tirade, telling the U.S. to “prepare to leave the Philippines, prepare for the eventual repeal or the abrogation of the Visiting Forces Agreement.”

READ: Duterte to US over aid issue: ‘Bye-bye America’

He was referring to a 1998 accord that governs American forces visiting the Philippines for joint combat exercises. The pact has helped the Philippines contain a violent Muslim insurgency in the south and train and equip Filipino forces facing an assertive China in disputed South China Sea waters.

“You know, tit for tat … if you can do this, so (can) we. It ain’t a one-way traffic,” Duterte said, adding tauntingly, “Bye-bye America.”

The U.S. Embassy in Manila said in a statement overnight that Washington will work closely with the Duterte administration to address any concerns it may have. It did not elaborate.

The White House didn’t immediately respond to a request for comment, but spokesman Josh Earnest has said previously that the White House would not react publicly each time Duterte made an offhand remark.

The 71-year-old Duterte, who describes himself as a left-wing politician, has made similar threats before and after taking office in June, but he and his officials have walked back on many of his public statements, causing confusion.

READ: Duterte to US: ‘You want bases here? Pay us’

While calling Americans “sons of bitches” and “hypocrites,” Duterte on Saturday praised China as having “the kindest soul of all” for offering what he said was significant financial assistance. “So, what do I need America for?” he asked.

He also said Russia can be a very important ally. “They do not insult people, they do not interfere,” he said.

The Philippines had been slated for another aid package after its previous five-year, $434 million poverty reduction program was successfully completed in May under Duterte’s predecessor, Benigno Aquino III.

A spokeswoman for the Millennium Challenge Corporation, Laura Allen, said Thursday that it would continue to monitor events in the Philippines before the next board review in March 2017.

The U.S. decision is among the first signs of how concerns about the rule of law and human rights under Duterte could entail economic costs.

The U.S. government, along with European Union and U.N. officials, has raised concerns about Duterte’s crackdown on illegal drugs, which has left more than 2,000 suspected drug users and dealers dead in purported gunbattles with police. More than 3,000 other deaths are being investigated to determine if they were linked to illegal drugs.

In a news conference in his southern hometown of Davao, Duterte was pointedly asked how many crime suspects he has killed in the past when he was still a crime-busting city mayor amid his vague and contradicting accounts of his exploits. The former government prosecutor again gave contrasting replies.

Replying to another question, he said that he indeed has killed, but did not provide details and tried to justify his act. “When I tell you now that I killed, do not term them as suspects because all of them died while they were fighting government people.”

He asked God for forgiveness in advance, saying he may not have time to pray if he’s assassinated. “God, forgive me for killing these idiots,” Duterte said, then blamed God for the presence of criminals. “You create a human monster so if you are God, why do you have to create these idiots? That’s why they die.” CBB/rga