Duterte to US: ‘You want bases here? Pay us’ | Global News

Duterte to US: ‘You want bases here? Pay us’ 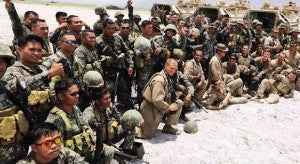 GAMES OVER No longer sporting grim and grimy faces, Philippine and US Marines, some of whom managed to smile, pose for a souvenir photo after their live fire RP-US Balikatan military exercises at Crow Valley in Capas, Tarlac province. The notorious Crow Valley was the gunnery range of the former US Air Base in Clark Field, then the largest outside the United States. (Photo by RAFFY LERMA/Philippine Daily Inquirer)

After warning the United States that he plans to abrogate an agreement allowing American soldiers to be in the country, President Duterte said Saturday night that they would have to pay if they want to return here.

“Start packing your things and get out of my country,” Duterte said in a speech at the birthday party of Sen. Manny Pacquiao.

“You want to come back here? You pay us. You want bases here? Pay us,” he added.

The relationship between the Philippines and the US should just be transactional, he said.

“Pera-pera na lang tayo, buti pa (Let it be all about money between us),” he said.

Earlier in the day, he said he plans to abrogate the Visiting Forces Agreement (vfa) as he railed once more against the decision of the US aid agency Millennium Challenge Corp. to withdraw funding for anti-poverty programs here.

He said the Philippines was not in a war, so there was no reason to allow American troops in the country.

“We are more durable, more brave,” he said. “I tell you, do not teach us about warfare. We have the longest insurgency problem here.” /ATM