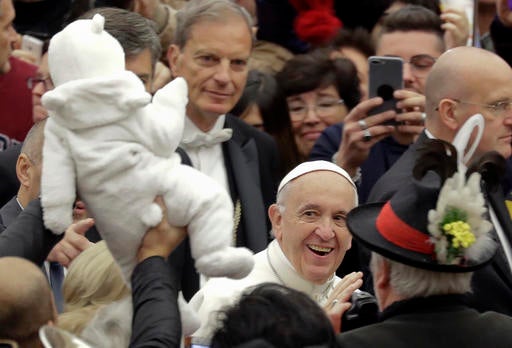 Malacañang on Saturday extended its well wishes and gratitude to Pope Francis as the head of the Roman Catholoc Church celebrates his 80th birthday.

“For more than three years as head of the Roman Catholic Church, Pope Francis has successfully inspired people around the world with his humble example, concern for the poor, and strong attention on God’s mercy,” Communications Secretary Martin Andanar said in a statement.

READ: Pope Francis hits 80—and he’s not slowing down

Andanar said Filipinos remain grateful for the five-day visit of Pope Francis in the country in January 2015, which left an “indelible memory” in the hearts of Filipinos.

“The people of the Philippines, home of Asia’s largest Catholic population, remain grateful for the historic first visit of His Holiness to the country in 2015. His touching homily in Tacloban has left an indelible memory in the hearts of thousands, especially survivors of typhoon Yolanda or Haiyan,” he said.

“We wish Pope Francis good health and good humor as he continues to guide us to build a more humane world. Maligayang kaarawan sa Santo Papa (Happy Birthday to the Pope)!” he added.

During his visit to the Philippines, Pope Francis visited typhoon-damaged Tacloban and met with thousands of Yolanda survivors.

President Rodrigo Duterte, then just an aspirant, also got in hot water after admitting that he cursed on the Pope during his visit for the heavy traffic it had caused in Metro Manila. He later apologized for his remarks. IDL