Duterte threatens to revoke VFA after US agency defers aid 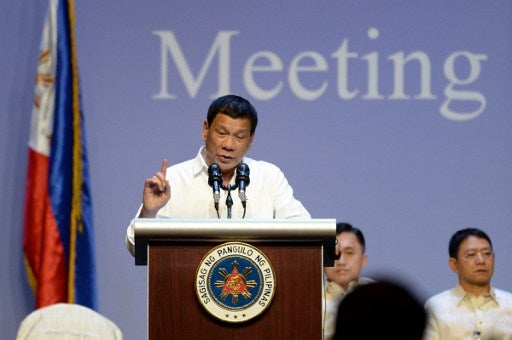 Philippines President Rodrigo Duterte speaks during a meeting with the Filipino community in Singapore on December 16, 2016. AFP PHOTO

Mr. Duterte’s latest tirade against the US comes months after he said he wanted all foreign troops to leave the Philippines in two years.

Insisting that the Philippines does not need American money especially since China has promised to provide for the country, Mr. Duterte told the US to prepare for the possibility of moving its troops out of the Philippines.

“You know, America, you might also be put on notice. Prepare to leave the Philippines. Prepare for the eventual repeal or the abrogation of the Visiting Forces Agreement,” he said upon arrival in Davao from state visits to Cambodia and Singapore.

“Ba-bye America, and work on the protocols that would eventually move you out from the Philippines,” he added.

If the US thinks the country is dangerous because people are being executed people, then why does it not just leave, Mr. Duterte asked.

Asked how soon he would terminate the VFA, Mr. Duterte noted that the deal, as per the Supreme Court was an executive agreement, not a treaty.

“I am putting them on notice. I will decide any day soon,” he said.

But he also said he would have to take the cue from US President-elect Donald Trump, with whom he seemed to have hit it off, and not from President Barack Obama.

Trump had been very courteous when they spoke on the phone, he said.

“In deference, I’ll just wait. I will let Obama fade away. If he disappears, then I will begin to reassess,” he said.

He thinks Obama was just trying to get back at him because he had cursed at his administration. TVJ

Trump jokes to Duterte: Give me tips on dealing with SOB