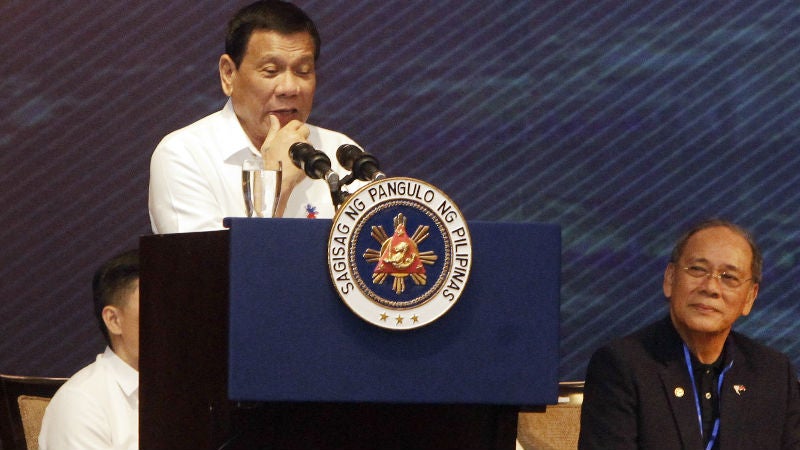 MANILA — President Duterte said on Tuesday, his introductory visits to Cambodia and Singapore this week would help the country lead its Southeast Asian neighbors in forging a common action agenda as the host of the 2017 Asean summit.

In his pre-departure speech at the Ninoy Aquino International Airport Terminal 2, Mr. Duterte said that in both visits, he would meet with key business leaders to identify mutually beneficial areas of partnership to enhance bilateral trade and investment while at the same time upholding the country’s independent foreign policy.

“With Asean integration, it is important that we harness the economic strengths and complementaries in our region to sustain growth beneficial to all,” he said, emphasizing that his visits to the two countries would be vital in the lead-up to the Philippines’ Asean chairmanship in 2017.

“This leadership role requires that we listen to all Asean brothers in order to build a common action agenda that will strengthen Southeast Asia for the benefit of its citizens,” he said.

In Cambodia, Mr. Duterte said he would raise issues of mutual concern with Prime Minister Hun Sen, including defense and security measures, law enforcement, the war against the illegal trade of drugs and the protection of Filipino and Cambodian migrant workers.

In Singapore, he will meet with President Tony Tan Keng Yam and Prime Minister Lee Hsien Loong to discuss defense and security cooperation addressing traditional and emerging threats that may spoil economic opportunities.

“Countering terrorism, violent extremism and radicalization will be the key areas of discussion as well as the war on illegal drugs,” said Mr. Duterte, noting that while Singapore has long put in place strict criminal laws, it has also been facing threats from extremists groups like ISIS.

He said an extremist group monitored in Sulu was said to be led by a Singaporean. “You’d be surprised that a Singaporean, as a nation with a very strict criminal laws and yet they are able to nurture a cell there of terrorists,” he noted.

Mr. Duterte  added that he would discuss with the Singaporean leaders how to boost the levels of two-way trade and investments between to two countries.

The President also welcomed the plan of US President-elect Donald Trump to abandon the Trans-Pacific Partnership (TPP) free-trade deal, saying it would “create a lot of problems” for Asian countries, especially in promoting generic medicines.

“There is a damper which says that we cannot, if we are a member of the TPP, sell [generic]. You still have to go to the branded ones, which are very expensive,” he said.  SFM