Comelec gets top international awards for handling May polls 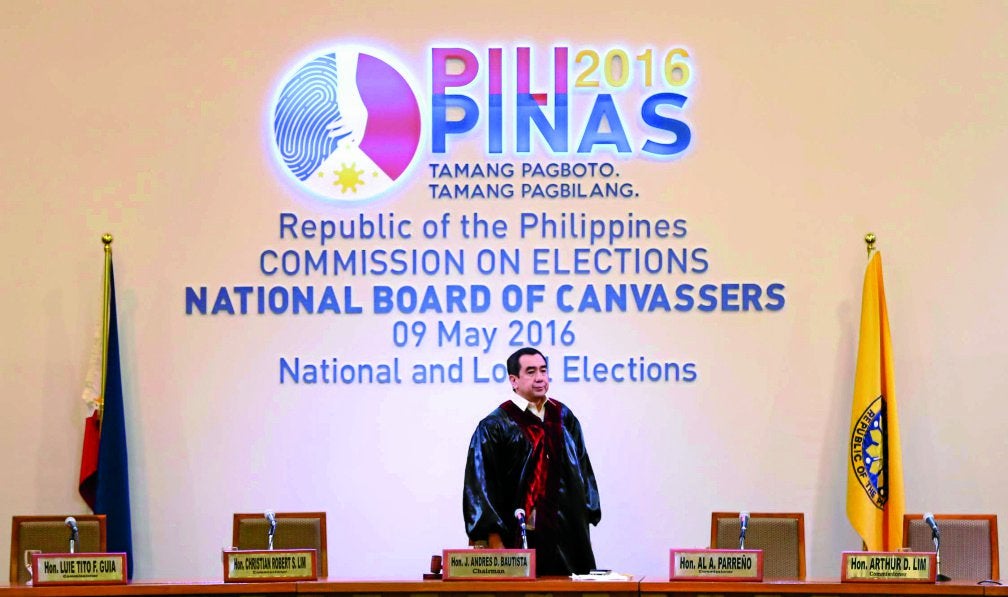 Comelec Chair Andres Bautista said the Comelec received several top international citations for its handling of the May 2016 national and local elections. The photo shows Bautista before a press briefing during last May’s polling. INQUIRER FILE

The Commission on Elections (Comelec) has been feted by a London-based international think tank which recognized the poll body for its outstanding performance in the May 2016 elections.

The poll body was hailed as the Electoral Commission of the Year and was conferred the Election Management Award by the International Center for Parliamentary Studies (ICPS).

The top two accolades were given in the ICPS’ 2016 International Electoral Awards held in Maputo, Mozambique, last Wednesday.

Comelec Chair Andres Bautista said the recognition would inspire him and his fellow election workers to do better and work harder.

“We are elated to be given the awards. Being nominated was already an honor… We dedicate these accolades and share them with all voters and our fellow election workers – the Comelec personnel, hundreds of thousands of Boards of Election Inspectors, citizens’ arms and volunteers,” he said.

In a press conference on Thursday, the poll body chief said the ICPS, which monitored the May 2016 national and local elections, cited the Comelec for its performance in the said exercise.

Based in London, the ICPS is a research institution of the United Nations Public Administration Network. Its International Electoral Award recognizes election management bodies for outstanding and remarkable performance in election work.

For the Election Management Award, the Philippines beat countries like Mexico and South Africa.

The Philippine poll body was chosen as the Election Commission of the Year “based on a track record that demonstrate efforts on fostering a community of good citizens among election practitioners, best practice, evidence-based research and policy in the field of elections.”

Meanwhile, the Election Management Award was given to the Comelec for surpassing “country specific challenges to guarantee a secure, transparent and smooth running of elections.”

The Comelec also won two other minor awards from the ICPS.

The Accessibility Award was given to the poll body for including in the electoral process groups which have been excluded due to physical, social, cultural or geographical impediments, such as indigenous peoples, persons with disability and senior citizens.

On the other hand, the Minority Participation Award was given for its efforts in strengthening minorities’ rights to actively participate in the democratic process by ensuring that they could register and cast their vote.

The 2016 national elections registered the highest voter turnout in the history of Philippine automated polls at 81.95 percent, with the fastest transmission rate so far at 96.14 percent. CBB