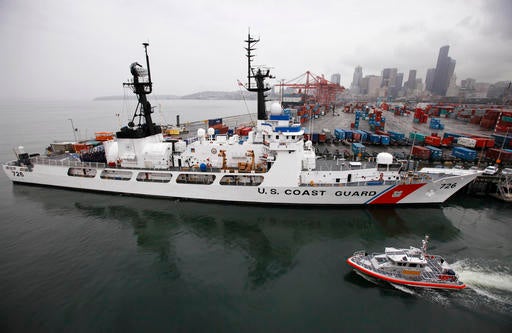 EDITOR’S NOTE: This is a weekly look at the latest key developments in the South China Sea, home to several territorial conflicts that have raised tensions in the region.

BANGKOK — A look at recent developments in the South China Sea, where China is pitted against smaller neighbors in multiple disputes over islands, coral reefs and lagoons in waters crucial for global commerce and rich in fish and potential oil and gas reserves:

The U.S. Coast Guard wants to play a bigger role in patrolling the disputed waters of the South China Sea, where up until now the U.S. Navy has been the driving force in challenging China’s vast territorial claims.

Coast Guard Commandant Adm. Paul Zukunft says his fleet could be the face of U.S. military presence without appearing too threatening — the same way China has increasingly assigned its coast guard ships to protect a string of man-made islands and Chinese fishing boats from rival claimants in the resource-rich waters.

“When you look at the East and South China seas, look at China’s coast guard, it is really the first face of China,” he told Voice of America in an interview.

He said he had proposed to the Department of Defense such an approach, with the decision to be taken by President-elect Donald Trump’s administration. During his campaign, Trump has indicated his support for more Navy ships and a robust U.S. role in the Pacific.

Compared with blue-hulled destroyers or cruisers of the U.S. Navy, white-hulled vessels of the U.S. Coast Guard, may be better positioned to get through the “narrow door of diplomacy,” Zukunft said.

He said the U.S. Coast Guard has a very good relationship with its Chinese counterparts, “with each side frequently boarding the other’s ships to carry out joint maritime law enforcement activities.” Coast Guard officials and rank and file have had more frequent interaction with Chinese forces than with those of other foreign nations, he said.

The Coast Guard could also help Vietnam, Indonesia and other Southeast Asian nations develop maritime law enforcement capabilities and “help maintain peace and security in the surrounding waters,” he said.

Over China’s objections, the U.S. Navy has deliberately sailed close to Chinese-occupied features four times since last October in so-called freedom of navigation exercises meant to enforce Washington’s position that the waters must remain open to international navigation.

The first three missions challenged China’s requirement for warships to get permission for transit through the territorial sea, while the last one challenged China’s sovereignty claims over waters encompassing the Paracel Islands.

Vietnam has protested a search-and-rescue exercise by Taiwan on the only South China Sea feature occupied by the self-governing island.

Eight vessels and three aircraft took part in the drill simulating a fire aboard a cargo ship that forced crew members to seek safety on Taiping, also known as Itu Aba, in the Spratly island group.

While Taiwan claims all of the Spratlys, mirroring Beijing’s position, it only occupies Taiping and hasn’t challenged the presence of forces from China or other nations on other islands. Taiwan coast guard head Lee Chung-wei told journalists that Taiwan’s sovereignty over Taiping is “undeniable,” but that it wants to turn the island into a base for humanitarian relief missions in the area.

Vietnam’s Foreign Affairs Ministry said that Taiwan’s exercise was a serious violation of Vietnam’s sovereignty as Hanoi also claims Taiping, as does the Philippines.

Chinese Foreign Ministry spokesman Geng Shuang said “the Chinese people on both sides of the strait have the obligation to preserve the ancestral property.”

Taiwan’s claim on Taiping suffered a setback in July when an international arbitration tribunal ruled that the feature, although the largest naturally occurring in the Spratlys, is actually not an island but a rock and entitled to only a 12-nautical-mile territorial sea around it.

As relations between the Philippines and China continue to thaw, the Chinese coast guard rescued two Filipino fishermen and allowed a Philippine coast guard vessel to approach the disputed Scarborough Shoal to receive the two men.

Chinese Foreign Ministry spokesman Geng Shuang said China “attaches great importance to the situation and has dispatched ships to search the waters” after reports that up to five fishermen were missing at the shoal.

China seized the shoal in 2012, but ties have improved after Philippine President Rodrigo Duterte met President Xi Jinping in October, after which Beijing allowed Filipinos to fish in the waters. China still maintains control of the shoal, which is within the 200-mile Philippine exclusive economic zone.