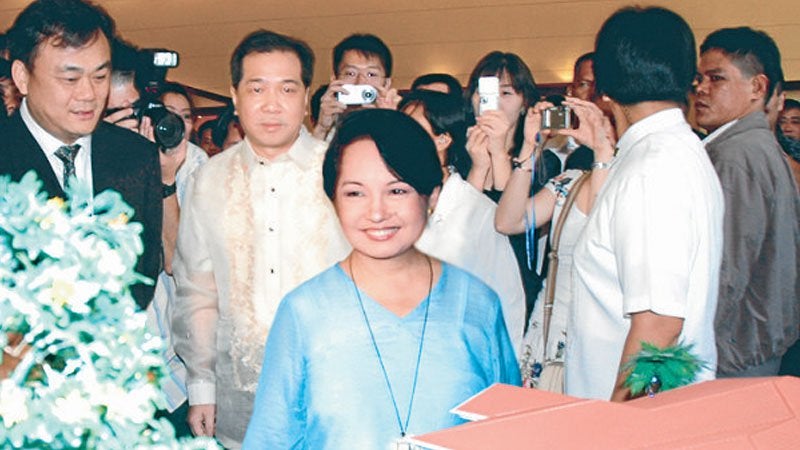 Macau-based gambling tycoon Jack Lam (left), is shown in this 2006 photo with then President Gloria Macapagal-Arroyo as he presented a scale model of his P2.5-billion Fontana Leisure Parks project. Lam has reportedly left the country forHong Kong. —INQUIRER PHOTO

MANILA — The Bureau of Immigration will be cancelling the investors’ visa of Macau-based gambling tycoon Jack Lam following the issuance of an immigration lookout bulletin order against him.

BI spokesperson Tonette Mangrobang said they have started the process of implementing the immigration lookout bulletin order against Lam issued by the Department of Justice.

“We are in the process of implementing the instructions (Justice Secretary Vitaliano Aguirre II) for the cancellation of the investors’ visa and implementation of the lookout bulletin order,” she said.

The BI spokesperson declined to go into the details of the confidential lookout bulletin order.

The BI said Lam has been using a Subic-Clark investor’s visa, a special visa issued by the government to foreign investors based at the Clark Freeport in Pampanga.

Lookout bulletin orders are issued to alert immigration officers and personnel to ensure that the subject of the order is detected when the person presents himself for immigration inspection.

It may be recalled that Aguirre issued the lookout order against Lam, days after Dela Rosa announced that the President wanted Lam to be arrested.

Lam is accused of trying to bribe Aguirre for the release of 1,316 Chinese nationals arrested at the Fontana Leisure Park in Clark, Pampanga.

The illegal aliens were arrested and later charged for overstaying, violating the conditions of their visa, and for working in an unlicensed online gambling firm reportedly owned by Lam.  SFM