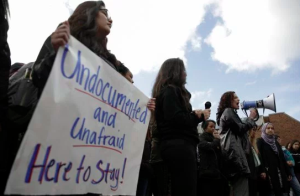 LOS ANGELES — After the victory of President-Elect Donald Trump, Americans across the nation were shocked and feared for the country’s future under his administration.

Trump’s immigration plans were one of the real estate mogul’s most controversial planks, with his promise of the mass deportation of undocumented immigrants and reversal of many of President Barack Obama’s policies.

California has the largest undocumented population in the country with more than 3 million as of 2013, according to Migration Policy Institute.

“For the first time since coming here, I was frightened, like, truly frightened. It felt like the world turned upside down, and I think it will very soon,” Gracie Reyes, 21, told the Asian Journal.

Reyes is an undocumented student studying physics at Cal State Los Angeles. She immigrated to the U.S. from the Philippines when she was two years old. Like many Americans, the election results shocked her. She felt that attitudes toward undocumented immigrants would “worsen.”

“I’m scared for what might happen to all the undocumented students, but I think that creating a community of support is the most important thing right now,” she added, expressing appreciation for “outpouring of support” she’s gotten from fellow students.

No cooperation on deportations

On Thursday, Nov. 17, CSU Chancellor Timothy White said that the 23-school system was dedicated to creating and maintaining a “safe and welcoming” system for the thousands of undocumented students on its campuses.

He said that the CSU — which is the largest public university system in the United States — was committed to declining “agreements with state or local law enforcement agencies, Homeland Security or any other federal department for the enforcement of federal immigration law.”

“We must take urgent stock of current policies and vulnerabilities pertaining to personal data held and processed by the California State University, to shield students from federal agencies under a Trump administration,” Newsom wrote in a letter to White on Thursday, Nov. 17.

The gubernatorial candidate for 2018 suggested collaborating campus police and administration on how best to protect these students and to establish these campuses as “Sanctuary Campuses.”

On Thursday, House Reps. from California Zoe Lofgren (D-San Jose) and Lucille Roybal-Allard (D-Downey) penned a letter with Illinois Rep. Luis Gutierrez to Obama asking him to prevent the deportation of the 750,000 undocumented immigrants who were granted deportation deferral under the Deferred Action for Childhood Arrivals (DACA) program.

They detailed that by forgiving nearly these individuals’ civil immigration offenses by way of presidential pardon, it would ultimately keep them from Trump’s promised deportation.

That same day, the White House quickly shot down the proposal.

Read Next
California braces for Medi-Cal’s future under Trump
EDITORS' PICK
Current dominant strain of COVID-19 more infectious than original—study
Water remains our saving grace right now
EuroMillions Superdraw: A lottery draw unlike any other is coming to the Philippines
DOLE: Return of OFWs’ remains from Saudi to be ‘delayed,’ deadline moved to ‘early next week’
Smart releases Hyun Bin’s second TVC
‘Justice will be done,’ Duterte assures as he vowed probe on Jolo incident to bare ‘truth’
MOST READ
Duterte tells military: No other president looked at you the way I did
Locsin warns of ‘severest response’ if China’s army drills in SCS ‘spill over’ to PH domain
Man who stole 2 cans of luncheon meat lands in jail in Manila
VP Leni Robredo: ‘Remember, you were made for these times’
Don't miss out on the latest news and information.