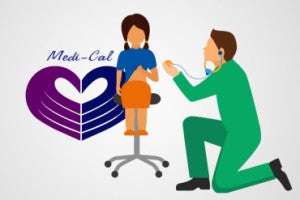 MENLO PARK — California grabbed the first opportunity to expand Medicaid and ran with it, helping cut the number of uninsured people in half in a few short years.

Thanks in part to billions of dollars in federal funding, a third of California’s residents — including half its children — are insured by Medi-Cal, the state’s version of Medicaid.

Now, with the election of Donald Trump and a Republican-controlled Congress, the state that bet so heavily on the Medicaid expansion is bracing to see how much of its work will be undone. While no one knows yet exactly what will happen, many policymakers and advocates fear the federal government will end or severely limit funding for the expansion.

“There are no easy cuts in Medi-Cal,” said Stan Rosenstein, a former Medi-Cal administrator. Reduced federal funding “could have a major impact on the uninsurance rate, on the viability of our hospitals, and it could have a very negative impact on the economy.”

Laurel Lucia, a health care program manager at the University of California, Berkeley Labor Center, said a well-funded Medicaid program benefits everyone, not just those currently on the program.

“A lot of people are just a layoff away from needing Medicaid,” she said. “The Republican plans for Medicaid threaten to undermine that safety net.”

Critics of the Affordable Care Act argue, however, that the Medicaid program has grown too big and expensive. They also want states to have more autonomy with their Medicaid programs and believe enrollees should become more self-sufficient.

“Any agenda to reduce dependency and increase self-sufficiency of those populations, Medicaid needs to be a piece of that,” said Ed Haislmaier, senior research fellow at the Heritage Foundation, a conservative think tank.

Trump pledged during the election campaign to repeal and replace the Affordable Care Act. The health law allowed states to expand their Medicaid programs, and California received more than $15 billion from the federal government for the expansion in 2016-17, according to the state Department of Health Care Services.

Trump also has said he supports funding Medicaid with block grants, essentially annual lump sum payments to states. Block grants would give states more flexibility in running their Medicaid programs but leave them responsible for covering any costs that exceeded the amount allocated. In addition, Republicans have expressed support for caps on spending per enrollee.

A new report by the Commonwealth Fund said that establishing limits on federal Medicaid spending would “effectively reverse a 50-year trend of expanding Medicaid in order to protect the most vulnerable Americans.” Block grants or per-capita caps would create funding gaps for states, likely cutting the number of Medicaid-eligible people and reducing coverage for beneficiaries, the report said.

California has made tough choices in the past in response to budget shortfalls. Health officials have cut dental coverage, frozen children’s enrollment, reduced doctor payments and closed adult day centers. But this time, the state could be forced to slice deeply into a much bigger program.

More than 5 million people have gained coverage in California since 2014, including 3.7 million who qualified as a direct result of expanded eligibility under the Affordable Care Act. Now, 13.6 million Californians are insured by Medi-Cal.

Largely because of the Medi-Cal expansion, taxpayers now cover about 70 percent of health care spending in California, according to the UCLA Center for Health Policy Research.

Given the state’s reliance on federal government support, state officials are fretting about what comes next.

“It all comes down to the dollar figure,” said Sen. Ed Hernandez, chairman of the Senate Committee on Health. “If there is not enough money, unfortunately the state is going to have to make some difficult decisions.”

The Medicaid program is paid for through a mix of federal and state funds, and anybody who qualifies under income and other guidelines can receive services. The federal government pays half the cost of care for most people who are eligible for Medi-Cal under pre-Affordable Care Act guidelines. It now picks up the whole tab for those who qualify under the expanded eligibility, but will start decreasing its share in 2017 under the terms of the health reform law.

Officials at the Department of Health Care Services, which administers the Medi-Cal program, declined to be interviewed for this story, saying they didn’t want to speculate.

For the past several years, consumer advocates have lobbied state lawmakers to restore funding for Medi-Cal benefits cut during the recession. They appealed successfully to voters in November with Prop. 56, the new tobacco tax that is expected to raise up to $1 billion dollars a year for Medi-Cal.

Some enrollees are worried about coming changes.

Terri Anderson, a resident of Riverside, Calif., fears losing her health insurance, saying she couldn’t afford medical care without it. “And I am at that delicate age where things start to fall apart.”

Anderson, 60, said she had been uninsured for many years before getting Medi-Cal coverage last year. She has a family history of breast cancer and has relied on Medi-Cal for mammograms and help to quit smoking.

When uninsured people get coverage, they are more likely to seek preventive services and less likely to end up in costly emergency rooms, said Lucia of UC Berkeley. Losing coverage could result in the opposite, she said.

“The state has an incentive to focus the money on the people who need it the most and to cut out waste,” Clancy said. “By getting rid of federal micromanagement, you give the states the freedom they need to do whatever they think is best for their citizens.”

Even before the 2010 health law, California was a leader in piloting different approaches to care, frequently applying for “waivers” that allow states to use federal funding for programs not typically allowed under Medicaid. California got permission, for example, to use federal funding to expand coverage for its uninsured population before Obamacare took effect. The state is also using waivers to revamp addiction treatment and keep high-risk populations out of emergency rooms.

Erica Murray, CEO of the California Association of Public Hospitals and Health Systems, said successful innovation depends on adequate federal funding. An increase in the uninsured population, a drop in reimbursements or a block grant funding system could have “dire financial consequences” for public hospitals and health systems, Murray said.

The Heritage Foundation’s Haislmaier said he and his colleagues prefer a premium support model, in which beneficiaries get a contribution to help them buy coverage. That would encourage people to be more independent and give them greater choice, he said.

Linda Nguy, policy advocate for the Western Center on Law and Poverty, said she and others are fighting to preserve the current system. “We do not want to see the gains made for so many people pulled back,” she said.