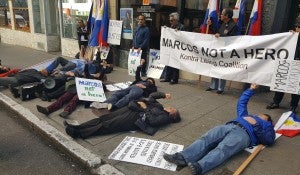 San Francisco Bay Area Filipino Americans stage a die-in to express their anger in a rally against the Marcos burial of remains at the Libingan ng mga Bayani. INQUIRER/Jun Nucum

SAN FRANCISCO – Filipino Americans in the San Francisco Bay Area may be literally tens of thousands of miles away from their Motherland, but they keep abreast of the happenings there, such as the secretive burial of the remains of former President Ferdinand Marcos at the National Heroes Cemetery.

Like the throngs that went out in protest in Metro Manila and several cities in the Philippines, they held a protest rally of their own in front of the Philippine Consulate here.

As in the past rallies, speakers took turns in lambasting the Marcoses for the and even President Duterte for making the Libingan ng mga Bayani burial happen. They carried placards, sang the protest song Bayan Ko and staged a die-in to show their indignation at the “connivance” between the Marcoses and Duterte.

Martial Law victim Susan Araneta admitted that she felt anger when she heard of the burial of Marcos at the Libingan ng mga Bayani.

“Nevertheless, I think this is not surprising because this is the way Marcos had operated in the past. I remember when I was in prison, there would be a complete blackout inside the prison camp because the soldiers that were killed in Mindanao were being brought in by helicopters. It has been very symbolic that the helicopter bringing Marcos remains to Libingan ng mga Bayani in secret. He had been like this even in death,” Araneta stated. 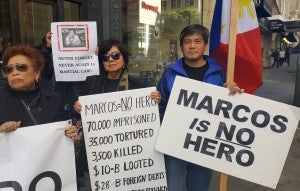 Araneta was glad though that the video shots from the Philippines showed that the younger generation was coming out even if they did not experience the crimes of the Marcos dictatorship.

“Millenials have awakened because they are experiencing in a way what has happened before in terms of the extrajudicial killings and the arbitrariness of the Marcoses. We were arrested without trial and were imprisoned.”

Rally leader Ago Pedalizo recounted that there was a motion for reconsideration filed with the Supreme Court (SC) that was way within the 15 days allowed for it to be filed.

“Besides the SC decision was not yet final and executory. But because, by nature, the dictator Marcos was a thief, they buried him at the Libingan ng mga Bayani without the knowledge and permission of the people,” Pedalizo stressed.

Consulate visitor Marleen King, a college student in Manila during Martial Law, joined the protest rally to express her utter disappointment on learning the burial of the remains of President Marcos at the Libingan ng mga Bayani. INQUIRER/Jun Nucum

Martial law book author Mila de Guzman enumerated the sins of the Marcoses including having 70,000 people imprisoned, 35,000 tortured, 3,500 killed, banning civil liberties and freedom of the press, looting an estimate of $10 billion in public funds, leaving $28 billion in foreign debts that has not been fully paid.

“Former President Joseph Estrada also tried to have Marcos buried at the LNMB but was not successful. So many people protested against the burial at LNMB, but Duterte still proceeded with it because of his closeness to the Marcoses. Let us be wary that Duterte might allow the return of martial law. He is now criticizing the media, the opposition and scaring the people criticizing him with threats of martial law and the suspension of the writ of habeas corpus. That is why we have to be careful and ready for the coming days,” de Guzman advised.

Video and print journalist Charito Benipayo maintained that the “the Marcoses are thieves, that is why the manner of burying him at the LNMB was also in the thief-like manner with the element of surprise.”

Victor Quimson of Pacifica, California and a freshman at University of the Philippines (UP) during the 1986 EDSA Revolution was outraged when he heard what was happening from friends back home.

“My friends went directly to the rallies at the Libingan ng mga Bayani and then proceeded to EDSA where my relatives also went,” Quimson narrated.

“It was my last year in the Philippines when I went out of the country in 1986 and I was outraged that this was still an issue that needs to be addressed. I was somehow consoled, however that that the young ones, who were not even born to know what was happening back in 1986, are in the forefront of the rallies as they are also experiencing now how it was back then.”

Quimson added that he wants want people to know that the Filipinos in the U.S. have not forgotten and are still willing to fight.

“I would like to support all those who are in the streets in the Philippines right now. I would like them to know that we are supporting them. If not for my family and everything, I would have taken the first plane back to join them. Since I cannot do that, the first I thought of after hearing the news was find something here I can do to express my outrage. It is really upsetting.”

San Francisco State University masteral student Jacob Dominguez joined the rally at the Philippine Consulate to show sympathy with Martial Law victims he came to know when he worked for Business World in the Philippines.

Jacob Dominguez a creative writing masteral student at San Francisco State University hadn’t been born during the Martial Law years and even during the EDSA revolution, “But I learned from my family who joined the EDSA People Power revolution since our grandfather was a victim of the cronies of Marcos.”

Dominguez explained: “Our grandfather, Rafael Walse, who was with the NBI advised the Marcos cronies not to let public funds be stolen, but instead of heeding him they silenced him. After his death, my grandmother was forced to fly to the U.S. to seek refuge,” Dominguez related. “Aside from my family, I came to know more about the EDSA revolution from the lessons in school and from watching the documentaries.”

Dominguez said what happened in the past few days made him cry in anger as he felt sorry for the victims that he came to know when he worked for Business World. 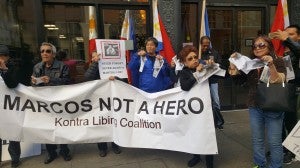 Rally protesters tear pictures of former President Marcos to show their disgust at the sudden burial of the remains of the former president. INQUIRER/Jun Nucum

Marleen King, a college student during Martial Law, happened to be at the Philippine Consulate to follow-up on some documents when she chanced upon the rally.

“I was in tears when I saw the rally. Bakit ganoon ang President (Duterte)? (Why is President Duterte like that?) When I learned about the sudden burial of Marcos, I cried as I remembered that they closed all media outlets including newspapers TV and radio stations when Martial Law was declared. It was a one-man rule,” King distinctly remembered.

“Why did that happen? So many presidents came after Marcos but this burial at the Libingan ng mga Bayani did not happen. Then during Duterte’s time it happened. Was it because he was helped by the Marcoses during his campaign? It is really is sad. There were many who got hurt and were made to suffer. What the protesters were saying were true. Marcos should have not been allowed to be buried at the Libingan ng mga Bayani.“