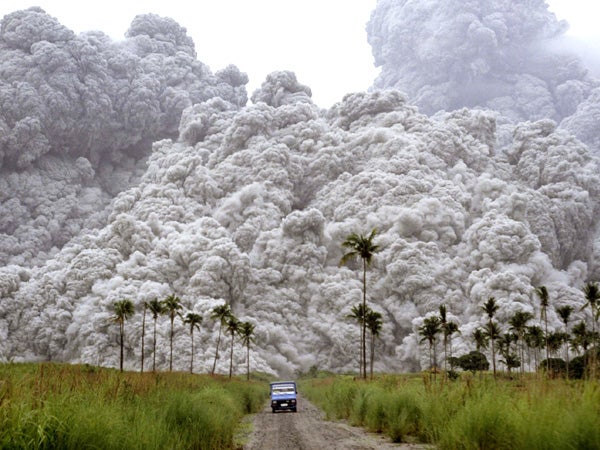 Mt. Pinatubo, June 15, 1991. Filipino photojournalist Alberto Garcia captures on film what would later be considered as one of the greatest images of the 20th century.

SAN FRANCISCO—Twenty years ago, Rhony Laigo, then a reporter-photographer for Times Journal, thought he had reached the end of the road.

Mount Pinatubo had just erupted. He was one of many reporters and photojournalists covering the story.

Rhony ended up being part of the story, in a way.

He and a colleague who served as his driver were somewhere in Zambales when they found the road blocked. Day had turned to night as a blanket of ash covered the sky. They had nowhere to go.

He and his driver saw their jeep getting buried in ash. Trees and houses around them were collapsing.  Rhony said he could hear the roofs of homes cracking from the pressure of the ash.

“Hindi na kami makahinga (we couldn’t breathe),” he said. “I was so tired.”

It was then that he thought they wouldn’t make it. “I said my final good-byes. This is it.”

Then they went to sleep in their jeep. Miraculously, they survived. The following day, they made it back to safety.

That’s because his editors and fellow reporters had been looking for him. They had feared that he Rhony had been one of the casualties of the most destructive eruption in years.

On Tuesday, Rhony and a group of photojournalists who covered the Pinatubo eruption will open the Mt. [email protected] Exhibit at Philippine Consulate General in San Francisco.

Rhony, who is now based in Southern California, helped take the exhibit to Los Angeles earlier this month.

Ironically, he doesn’t have any photos in the exhibit. He never kept copies of his work and didn’t bring any with him when he left for the U.S. in the early 1990s.

But among the Pinatubo photographers, he definitely endured some of the most harrowing experiences. His colleagues call him a Pinatubo survivor.

He still remembers clearly the painful images of the disaster. Like the lahar that devastated and changed the topography of huge areas of Central Luzon.

“I really felt bad for the people of Santa Rita, Pampanga,” he said. “The river there really changed course. Dumadaan sa mga bahay bahay. The water was passing through the houses.”

“The eruption became a personal experience for me,” he said. “You could see the fear in the people. We were trying to escape — but we didn’t know what to do.”

(The [email protected] exhibit will run from Oct. 11 to 12 at the Philippine Consulate General, 447 Sutter St., San Francisco.)