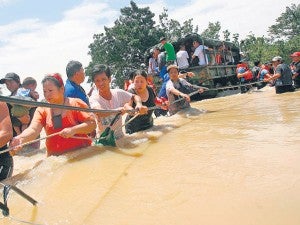 The Philippines ranks third in the list of countries most vulnerable to climate change, a study by a United Nations agency has warned.

Vanuatu which is experiencing a fresh water shortage ranks number one with a 32-percent disaster risk. Tonga in the second spot has 29.08 percent.

The Philippines ranks third with a 24.32-percent disaster risk.

The risk index used in the report analyzed each country’s exposure to natural disasters like storms, floods, earthquakes, droughts and sea level rise.

It also estimated their susceptibility to damage based on the state of their economy and infrastructure, and the countries’ ability to respond to these disasters through preparedness measures and early warning systems. It also studied their ability to adapt to future disasters due to climate change.

Filipino scientists said the Philippines would get more rains in the coming years due to climate change.

In 2010, the climatology division of the Philippine Atmospheric, Geophysical and Astronomical Services Administration (Pagasa) reported that climate data from 1960 to 2003 showed significant increases in the frequency of hot days and warm nights in many areas of the country.

Pagasa also observed that the number of cooler days had decreased. This trend mirrors the experience of other countries in Southeast Asia, Pagasa said, as it predicted more rains in the Philippines in the coming decades.

The Climate Reality Project, which is backed by former United States Vice President Al Gore, said the study confirmed what residents of the Philippines already know from their experience.

“This is reality. Lives and livelihoods lost are not a hoax, these are all realities brought about by the biggest crisis this world has ever faced. As the study shows, the Philippines ranks third in exposure to natural hazards like earthquakes, storms, floods and droughts, as well as the exposure of populations to sea level rise by one meter,” said Rodne Galicha, Philippine country district manager of The Climate Reality Project (TCRP).

TCRP stressed that climate change is not the only culprit. Galicha noted that man-made factors, such as land conversion, deforestation, and mining activities, worsen the effects of climate change and have a multiplier effect on disasters.

“Massive land conversion, long-term deforestation, mining in island ecosystems and forests and lack of solid waste management are just some of the culprits,” TCRP disaster risk reduction and management expert Miguel Magalang said. He added that a comprehensive land use plan based on principles of climate change adaptation and disaster risk reduction should be strongly adopted by the government.

The floods and landslides from typhoons Pedring and Quiel recently emphasized the Filipinos’ vulnerability to extreme weather.  Almost a week since Quiel left the Philippines, many towns in Central Luzon were still underwater.