Andanar is ‘Communicator of the Year’ 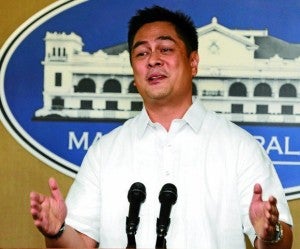 A prestigious media organization has named Presidential Communications Secretary Martin Andanar “Communicator of the Year” for his “unabashed embrace of the principles of creative imagination” in serving as President Duterte’s chief spokesman.

The Committee for the Advancement of Creative Imagination and the Systematic Institutionalization of Rodrigo’s Aspirations — better known as CACI SIRA — also blasted Andanar’s critics who they say fail to recognize the “extraordinary genius” behind the secretary’s pronouncements.

CACI SIRA cited Andanar’s spirited defense of the plan to give the late dictator Ferdinand Marcos a hero’s funeral. Marcos was recently given a hero’s burial at the Libingan ng Mga Bayani sparking mass demonstrations throughout the nation.

In his column in the Philippine Daily Inquirer (which CACI SIRA says has become an even more respected media organization for giving Andanar a regular column), the secretary dismissed the protesters as “temperamental brats.” CACI SIRA called Andanar’s statement “audacious and inspired.”

“The secretary used a five-syllable word, a clear sign of his sophisticated intelligence,” CACI SIRA said.

CACI SIRA says the senator took an “unfortunate position” based on the fact that his father was a prominent opponent of the Marcos regime who was imprisoned and harassed repeatedly by the dictatorship for fighting for the rights of Filipinos.

CACI SIRA also dismissed the ongoing protests against the Marcos burial, saying: “Who cares if Ferdinand Marcos killed more than 3,000 people in his 21-year reign. That’s nothing. Duterte has been in power only six months — and the death toll under him has already exceeded 4,000.”

CACI SIRA called Andanar a “visionary communicator with an awe-inspiring capacity for creative and courageous imagination, a public servant who has dared paint incredible portraits of a leader responsible for a terrifying bloodbath.”

Andanar has painted portraits of the Dear Leader Duterte as Jesus Christ and as King Arthur.

In Japan, Andanar said even the Japanese Prime Minister “has not concealed his admiration for the new Filipino leader.” The secretary notes how the ordinary Japanese saw Rodrigo Duterte as “some sort of Filipino samurai, giving flesh to the honorable warrior code of the Bushido.”

CACI cited one of the secretary’s recent columns in the Philippine Daily Inquirer where he writes: “Desperate times require exceptional leadership. The nation is fortunate to have an exceptional leader in the threatened times we live in. He is the epitome of what, in Tagalog patois, we describe as ‘matigas ang ulo pero pusong mamon.’ He will not stop if the people’s welfare depends on his getting things done. He will try and rescue every distressed person if that is at all possible. He is tribal elder, stern father, rainmaker and mayor rolled into one. He is sui generis.”

“Pure poetry,”the CACI SIRA said of the secretary’s words. “Secretary Andanar clearly deserves to be called Communicator of the Year.”