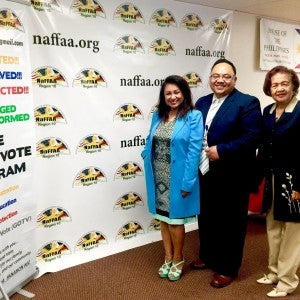 WASHINGTON, DC — While the 2016 election results may have delighted some and disappointed others, leaders of the foremost Filipino American national organization were heartened by the growing participation of Filipino Americans in the electoral process.

Brendan Flores, national chairman of the National Federation of Filipino American Associations (NaFFAA), said, “We are also encouraged by the number of Filipino Americans who ran for public office in local and state elections. This is what community empowerment is all about, and they proudly demonstrated these aspirations on November 8.”

“We estimate a 10 percent increase nationwide, thanks to the tremendous voter outreach conducted by our members across the country,” says FilAmVote National Coordinator Juanito Amor.

“Voter turnout was also high among Asian Americans as a whole, as indicated by early CNN exit polling, but we don’t know just yet the share of votes casted nationally by Filipino Americans. I appreciate the tireless efforts of the many Filipino American groups to register voters, educate them about the issues and get them to the polls.”

Acknowledging the outcome of the election, Flores stated that he was heartened by President-Elect Donald Trump’s assurance that he would be president for all Americans.

“We wish him well as he takes on this challenging task,” Flores said. “Fear, hate and bigotry dominated the political rhetoric of the presidential campaign. We hope that he will indeed, ‘bind the wounds of division’ so we can all ‘come together as one united people’ regardless of partisan differences.”

“Hillary Clinton and her supporters are to be commended as well for their determined efforts and for the causes they championed,” Flores asserts. “Her long public service record is truly remarkable and we owe her an enormous debt of gratitude for her selfless dedication. We are also inspired by her call to build an America that is ‘hopeful, inclusive and big-hearted,’ one that is fair to people of all races and religions, for immigrants, for LGBT people and people with disabilities.” 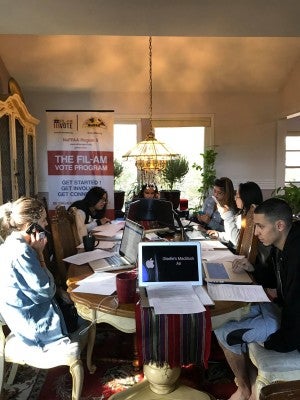 Flores also commended Filipino Americans who ran for office, both those who won and those who lost their bids.

“We congratulate all the candidates who succeeded, and we commend those who tried but fell short. Your efforts to represent us and give voice to our issues are inspiring examples of leadership. They are integral to our empowerment,” Flores said.

The following are the candidates who ran for various offices across the country:

Rob Bonta, the first Filipino to serve in the California legislature, was reelected to a second term as assembly member for district 18 in Alameda County.

In Hercules, Calif. Andrew Gabriel, a 23-year-old law student, won a seat at the Rodeo-Hercules Fire Board, while newcomer Roland Esquivias won and placed second in the three open seats of the Hercules City council.

In Vallejo, Calif., Bob Sampayan won as Mayor. A retired police officer, he has served in the City council since 2011. Hermie Sunga and Rozzana Verder Aliga were elected city council members while Ruscal Cayangyang won a seat in the school board. Mae C. Torlakson put up a good fight but lost the Dist. 14 assembly contest for Contra Costa and Vallejo area

In Daly City, Juslyn Manalo, a former community service worker who fought for the rights of Fil-Am veterans, became the first Filipina to win a council seat in San Mateo County’s largest city. Another Filipino American, Glenn Sylvester, will join her in the City Council. Former Daly City Mayor Mike Guingona lost his bid, however, for northern San Mateo supervisor.

In Bergenfied, New Jersey, businessman and community leader Salvador “Buddy” Deauna won a city council seat. A farmer’s son from Camarines Norte, Deauna is the eldest of 16 children. This is his first time to enter the political arena. Jonathan Wong didn’t quite make it to become Mayor of Mahwah, New Jersey.

Utah Attorney General Sean Reyes won reelection to the post he was elected to in 2012. Reyes is the first ethnic minority to become the Attorney General of Utah and hold statewide office in Utah. He sat on the APIA Advisory Board for the Trump Campaign.

Mae Cendaña Torlakson sums up best these electoral aspirations: “Together, we fought for our working families, for our children, and for our environment– and, I am deeply proud of that fight. I may have lost the race to represent Assembly District 14, but I have not lost my drive to fight for the people of Contra Costa and Solano Counties. I will continue to work to improve the lives of our community members, and I am grateful that you gave me this opportunity.”

Two prominent Filipino Americans who have served in state legislatures are encouraged by the showing at the polls and the number of candidates compatriots who threw their hats in the ring. They urge the Filipino American community to continue to be energized by the electoral process. 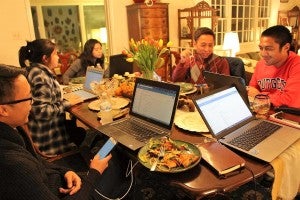 Filipino American millennials deployed their laptops and cell phones to reach out to 26,000 voters in Washington, DC, Maryland and Virginia as part of NaFFAA Capital Region’s voter outreach. They fielded calls directing voters to their voting precincts. CONTRIBUTED

Republican Delegate Ron Villanueva of the 2lst District of Virginia and a member of the Trump Asian American Advisory Board, says, “We have a lot of work ahead to advance our communities and make America great again, like fixing a broken immigration system, sustaining jobs here in America, restoring our prominence in the international community and having government work for us instead of against us. America is great because of its people, so let’s all unite, work hard and move our country forward.” Villanueva was elected to the Virginia state assembly in 2009.

In her 9th year as delegate to the Maryland Assembly, Democrat Kris Valderrama, said, “I am deeply concerned by some of the hateful and frightening things [Trump] said about Filipinos during his campaign, particularly his plan to ban Filipino immigration to the United States, along with those from most Arab countries, which he considers a threat to national security.” He urged Trump to be “a president for all Americans.”

Valderrama also thanked President Obama for his leadership “with grace, humility and with a touch of humor,” and for enacting the Filipino WWII Veterans Parole Program, which allows the families of certain WWII veterans to come to the United States and be united with their loved ones during their last years.

During the election season, NaFFAA encouraged the active participation of Filipino American millennials in voter registration and outreach. NaFFAA’s Capital Region partnered with APIA Vote and deployed more than half a dozen students from area colleges to make phone calls, reaching 26,000 voters in the Washington, DC, Maryland and Virginia region.

“It’s my second year phone banking,” said JC Videna, a graduate of George Mason University. “It’s a civic responsibility for me as a Filipino American to encourage people to vote. We are already marginalized in terms of numbers, but we do not want to further marginalize ourselves by failing to turn out at the polls. Every great change in the world has started with leadership, and in this country, that leadership is voted on. I did my part, and I hope others did the same.”

Added John Victoria, a former US Navy Academy student: “The most fulfilling part about the entire experience was being on the frontlines as a direct touch point to our community.  I am confident that our phone calls and voicemails may have been tipping points for some members of our community who had been on the fence about voting, or who may have felt their vote and their voice did not matter.”

To Victoria, the most important lesson was being able to connect with Filipino American voters, regardless of their party affiliation, so their voices could be heard. “Low voter turnout makes it easy for elected officials to discount what we have to say because why should they care about the issues we voice in our community if we won’t affect election results?”

NaFFAA’s mission of community empowerment will be tested again in November next year when voters elect their governors in New Jersey and Virginia. There are also the mid-term elections in 2018 for the House and Senate.

“Off-year elections are a great way to maintain momentum of voter turnout from the Presidential election,” Flores said. “Our resilience as a community, as borne out in our history of struggle and resistance, will see us through as we face tomorrow’s challenges. As President Barack Obama aptly put it, ‘No matter what happens, the sun will rise again in the morning.’”