And now another ‘People Power’ uprising? 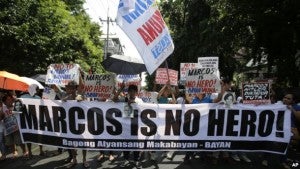 It’s hard to imagine that the very thing that made the Philippines rise up and overthrow a government was simply disregarded by the Supreme Court and the powers that be.

And now it’s a test for Duterte’s tolerance of a country.

Once the High Court dismissed attempts to block the burial of the dictator Ferdinand Marcos, it was like a stealth burial. No media. No protests. In the ground. Amen. Facebook.

If you haven’t noticed, we live in a time where the political trend is quite simple.

Things that would never happen before, that were once thought to be downright “inconceivable,” are happening right now, and with stunning regularity.

We’re seeing it in the U.S. and, of course, in the democracy built in its own image, the Philippines.

And now, despite protests heard round the world and in Filipino communities in the U.S., it finally happened.

The late dictator Marcos, supposedly unburied since 1989, finally got covered up with some hallowed dirt.  The “hero’s burial” for Marcos was another win for Philippine President Rodrigo Duterte, the Filipino Trump, who manages to do as he pleases, justice be damned. 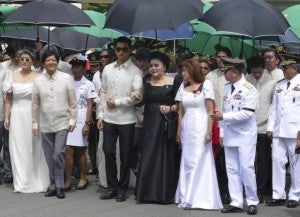 “I’m just being legalistic about it,” said Duterte to the media. “He was president, he was a soldier. That’s about it.”

Duterte was spectacularly modest about his political achievement. This time, his wish was to honor his personal hero, a man whom Amnesty International says imprisoned 70,000 people during martial law, tortured 34,000, and killed 3,240 Filipinos.

Small numbers compared to Duterte’s current effort to fight “shabu,” the Asian form of crystal meth. The anti-drug effort by police has officially racked up 2,500 deaths. But Philippines media say the death toll is closer to a number that outdoes Marcos–4,000. And the number includes many more innocent civilians.

These are the so-called extrajudicial killings that have concerned President Obama and members of the U.S. Senate. Duterte responded infamously by calling Obama a “son of a whore.”

Duterte talks tough and has years to catch up with Marcos, who not only imprisoned, tortured and killed his political opponents, but also plundered the country’s treasury and enriched his family by more than $10 billion.

That’s more than double what Trump’s worth.

Marcos, propped up by the Reagan and Bush Administrations as he ruled the Philippines with an iron hand for nearly three decades, was laid to rest Thursday in the country’s national cemetery for heroes, the Libingan ng mga Bayani, in Manila.

Marcos’ remains were quickly flown to Manila buried in an almost secret way.

No press was allowed (does that sound Trumpian?). It meant that protesters had no advance warning of the ceremony. Philippine Vice President Leni Robredo called it a “hidden burial.” Others called it just plain “sneaky.”

Sort of like the man being dubbed a hero.

Even though political opponents were planning to file an appeal, the Marcos family and the Philippine Army were able to rush the body to burial.

And then the Marcos posted scenes from the burial on social media.

It was an insult to the thousands of protesters worldwide, including many of the four million Filipinos in America, nearly 20 percent of the Asian American population.

Most of them came to the U.S. for just one reason—to escape the Marcos years.

They didn’t want to be among the thousands who died or the millions repressed because of Marcos’ autocratic rule.

Allowing the burial legitimizes the Marcos repressive dictatorship and sends a sad, dark message about Duterte to the Filipino people and the world.

Democratic rule? Rule of law? Does it exist in Duterte’s world? Or did they bury all that too with Marcos?

In this era of outsiders, anti-elites, nationalistic strongmen, and disruptive forces in world politics, the burial of the denounced dictator Marcos was just the latest inconceivable to occur.

In May, the victory of Duterte, a local mayor with a strong law and order bent but little international experience, became a leading indicator for what was to follow. In June came the Brexit vote. And then here in the U.S. on Nov. 8, we had the election of the least qualified man ever to become president.

Takes a bit of the edge off Duterte rehabbing the plunderer Marcos as a hero. But it’s still a bona fide inconceivable. 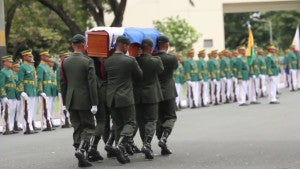 It’s not that much different from Trump rehabbing and pumping oxygen into GOP retreads like Rudy Giuliani, who defended “stop and frisk,” or Newt Gingrich, the man behind a plan derided as the  “Contract ON America.”

And then there’s Steve Bannon, the Breitbart News boss who became chair of the Trump campaign last summer. In a July 2016 column, Bannon called the mainstream news focus on African Americans being shot and killed by police as the Left’s “plot to take down America.”

As the editorial head of Breitbart, he’s taken shots at Muslims, women, trans people, as well as people of color and immigrants. And all with that glow of a happy flame-throwing white nationalist. If Ailes and Fox had moderated and become the mainstream, Breitbart under Bannon was the white ethnic media.

Now he has the president’s ear, not as a “journalist,” but as a senior advisor.

Inconceivable? At one time, but not anymore.

Just like in the Philippines, where Duterte seems to be tempting another “People’s Power” upheaval.

He already has the police shooting up a drug war driving up fear in the street.

Now he’s done the inconceivable. He’s buried the dictator as a hero.

If he gets away with that, he can get away with anything.

Emil Guillermo is a veteran journalist and commentator based in the Inquirer’s U.S. bureau.