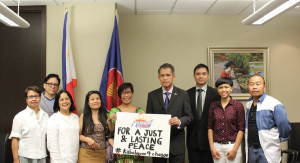 Members of Migrante BC present Kababayan4Change to officials of the Philippine Consulate in Vancouver. CONTRIBUTED

RED DEER, Alberta – The renewed peace talks between the Philippine government and the National Democratic Front have brought hope for “real change” even for Filipinos abroad whose reasons for going overseas are tied to unresolved issues in the motherland.

It appears not the two negotiating panels – the Philippine government and the National Democratic Front of the Philippines (NDFP)– have the biggest stakes in the negotiations, but the Filipino people including Filipinos overseas, said Dhon Mojica, Migrante Alberta chairperson.

Migrante has touched based with Philippine consuls in Ontario and British Columbia, following the move by Migrante Europe whose delegation was present during the first round of peace talks in Oslo, Norway in August, to present their campaign Kababayan4Change backing the peace talks and promotion of genuine change.

“When the first round of peace talks opened in Oslo last August, there was a delegation from different European countries of Migrante Europe,” she said in an email interview with INQUIRER.net.

At the end of the opening ceremonies, the delegation approached both panels and presented their agenda what migrants want from the peace talks, she said.

“This was a first in all the years of peace talks. And an important first,” she added.

That while the group could not sit with the two sides on the table, they could lay out their demands on social and economic reforms because they directly affect their lives, she said. “They wanted their voices heard,” she added.

Ledesma described the atmosphere in the recent negotiations between the parties “easy.”

“There was so much laughter, easy to agree suggestions on either sides,” she said, pointing out that the members of both panels know each other from working across the table in previous peace negotiations.

Ledesma is also a member of the NDFP Monitoring Committee that alongside the Philippine government’s counterpart, monitors the implementation of the Comprehensive Agreement on Respect for Human Rights and International Humanitarian Law (CARHRIHL).

In August, President Rodrigo Duterte had made pronouncements regarding the release of political prisoners.

As a gesture of good faith ahead of the upcoming formal peace talks, NDFP’s top political officers and consultants were granted bail in August, including Benito and Wilma Tiamzon, chairman and secretary general, respectively of the Communist Party of the Philippines – New People’s Army (CPP-NPA). However, the NDFP has yet to see its remaining political prisoners numbering more than 400 get out of jail.

“That is the current problem now.  Not a single political prisoner has been released,” said Ledesma.

Some of the political prisoners, who Ledesma said have been unjustly detained, have been imprisoned for over thirty years, including elderly ones who are eighty years-old. “Many are in poor health, aggravated by prison conditions.  It is unjust to keep them in prison,” she added.

She said that NDFP is hoping that there will be releases of political prisoners before Christmas.

NDFP has reiterated the release of its political prisoners under a general amnesty that would restore their civil and political rights is a basis to make way for a bilateral ceasefire agreement.

Both sides have maintained unilateral ceasefires, which Ledesma said has been the longest on the side of the CPP-NPA. “There have been many violations of the AFP of their own unilateral ceasefire.  The NPA evade the AFP to keep to the ceasefire, but on the part of the AFP, the extra-judicial killings continue,” she added.

“I am hopeful because there appears to be better rapport and mutual trust between the two sides, which is extremely important,” he said in an email interview with INQUIRER.net.

“After decades of trying to arrive at a mutually acceptable solution to this conflict, we now see a distinct opportunity under this Administration to move on with the peace process,” he said.

He also cited the stake overseas Filipinos have in the resolution of the armed conflict in the Philippines. “We share their aspirations for peace, progress, prosperity, equal opportunity, clean government and the end to poverty in the country,” he added.

Ferrer met with members of Migrante BC and other community groups in August who presented the Kababayan4Change campaign.

The root causes of the armed conflict could only be addressed by social and economic reforms to improve the plight of Filipinos, particularly compatriots overseas, said Mojica of Migrante Alberta.

The group is set to meet with Calgary-based Philippine Consul General Julius Torres to echo the Kababayan4Change campaign.

“It is high time that we put in our agenda as migrants, the call for lasting peace. The exact reasons why the armed conflict continues are the same reasons why our kababayans leave our country daily – poverty, joblessness, landlessness,” Mojica said.

The NDFP is pushing for a program of genuine land reform and national industrialization, contained in its draft of the Comprehensive Agreement on Socio-Economic Reforms (CASER).

“But negotiating what will radically change the economic and social system, will not be easy. But whoever said negotiations were easy?” Ledesma said.

The third round of formal peace talks will take place on the third week of January, 2017.