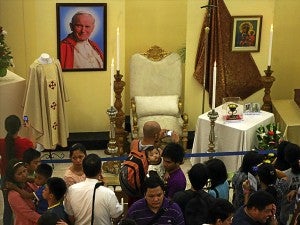 The Diocese of Cubao kicked off the commemoration of the feast day of Blessed John Paul II with the launch of a relic and photo exhibit at Gateway Mall at Smart Araneta Center in Quezon City.

Cubao Bishop Honesto Ongtioco said the exhibit, dubbed “Beatus: Embracing the Holiness of John Paul II,” is the start of a three-week celebration that is the Philippine Church’s contribution to the worldwide remembrance of the life and words of the recently beatified pontiff.

The relics on display include the pope’s blood in a container called a “Theca,” his pectoral cross, Episcopal ring, chasuble, chair, rosary, papal medal, a piece of his papal cassock, a piece of cloth taken from the sheet of his deathbed, among other things.

“This is not just an exhibit to show things but more of a catechetical presentation of his life and legacy… a way of teaching and of making him known to the people,” said Ongtioco.

At Sunday’s exhibit launch, shoppers and passersby took time to view the photos and the rare public display of relics of the pope—some of them enshrined in glass-like gems.

A woman knelt to pray at one of the pews placed before a set of relics, which were culled from the private collections of the San Carlos Seminary, the Loyola House of Studies of Ateneo de Manila and the Araneta Center.

During John Paul’s beatification in May, the Vatican decreed his feast day would be on October 22—the anniversary of the liturgical inauguration of his papacy in 1978.

A call to holiness

The celebration will also be highlighted by a concert dubbed “Blessed: A Call to Holiness,” to be held at the Smart Araneta Coliseum, where the Pope had addressed professionals, catechists and the youth during his first pontifical visit to the Philippines on Feb. 18, 1981.

During that visit, then  Pope John Paul II enjoined the crowd to respond to the call of holiness in the practice of their profession and vocation. He also declared that one day, the big dome known mostly for glitzy shows and basketball matches  would become a “colosseo of papal audiences.”

His vision will come full circle on October 29 with the free festive concert filled with music and inspiring testimonials to culminate a three-week celebration, Ongtioco said.

“The concert will give more color to our celebration because at the concert, we will also sing the song that united all the youth around the world, ‘Tell the World of His Love,’” Ongtioco told the Philippine Daily Inquirer in an interview.