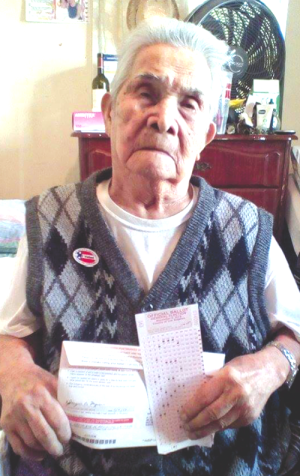 Joaquin Arciago Guzman, 107, became a US citizen and voted for the first time. ASIAN JOURNAL/Screenshot

LOS ANGELES — When Joaquin Arciago Guzman became a United States citizen in 2012, the steadfast Filipino American made headlines as one of the oldest individuals to gain U.S. citizenship.

In a 2012 ceremony in downtown Los Angeles on the Fourth of July, Guzman sat in a wheelchair — holding a miniature American flag — as he recited the Pledge of Allegiance, sang along to “The Star-Spangled Banner” and took the citizenship oath with about 7,300 newly naturalized citizens.

In addition to maintaining health care benefits, Guzman had another reason to become an American citizen: to vote and contribute to a country that has provided him with countless opportunities.

Still going strong at 107 years old, Guzman became one of the oldest voters in the country to cast a ballot in the 2016 general election. With the help of his niece Julie Aguinaldo, he sent in his ballot by mail weeks before Election Day, happy to have done his duty as an American citizen.

Aguinaldo said that Guzman always supported the Democratic Party, saying that he believed that the party prioritized the interests of “the working class people” and ensured more health benefits for Americans. He also wished to witness the election of the nation’s first female president.

Although the presidential election didn’t swing in his favor, he believes that “Clinton is still the winner.”

Of his decision to vote, his family expressed pride and happiness for their elder.

“This was something he really wanted to do as an American, so we’re all happy that he got to do it,” Aguinaldo said with a smile.

Born in Paniqui, Tarlac in the Philippines in 1910, Guzman has lived through two world wars, Philippine independence and 18 U.S. presidential administrations. At the age of 18, he took a 23-day journey by boat across the Pacific Ocean to work as a farmer in Salinas, California, picking lettuce throughout the late 1920s into the Great Depression.

In 1939, he then went back to the Philippines to marry the love of his life, Paz Irene Gatchalian, the daughter of a mayor. Before the birth of their first child of six, Guzman went back to work in the U.S. to support his family in 1941, continuing to work in the fields through World War II.

In 1948, he moved back to the Philippines where he and his wife would raise their family. It wasn’t until the mid-1980s when he, his wife and two of their adult children moved to California for good, settling in the Los Angeles area.

In 2012, his son Joaquin Guzman, Jr. said that he opted to become a citizen over renewing his green card because he feared he would lose his health benefits.

To the regret of the family, Guzman’s wife did not live to see the ceremony. She died in 2007 at 89 years old.

In 2016, Guzman continues to live a long, accomplished life with his family in North Hollywood. At 107, he’s one of the oldest living Americans. How has the former farmer lived such a long life?

“By eating a lot of vegetables,” Aguinaldo said with a laugh.