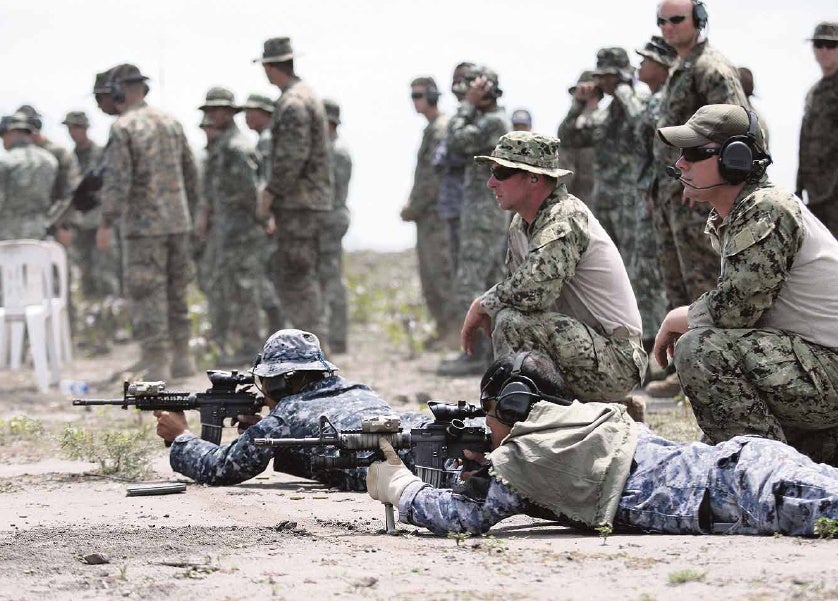 SHARING EXPERTISE American and Filipino soldiers participate in a joint military exercise in General Santos City in this photo taken in 2012. President Duterte said in September that US troops should leave Mindanao. —JEOFFREY MAITEM

US and Philippine Special Forces began annual combat exercises on Wednesday, despite President Duterte’s threats to end joint war games and kick American soldiers out of the Philippines.

The US military says that so far there’s been no reduction in cooperation with the Philippines, a long-standing US ally, despite Mr. Duterte’s threats to do so and his expressed desire to expand security ties with China and Russia.

But in a sign of a possible restriction, Col. Benjamin Hao, spokesperson for the Philippine Army, said on Tuesday that both the United States and the Philippines had agreed to forego live-fire drills in the field during the monthlong Balance Piston exercises, which opened in Palawan province on Wednesday.

He said about 40 elite Filipino troops were taking part but wouldn’t say how many Americans were participating.

He didn’t give a reason for dropping the live-fire maneuvers.

The Department of National Defense has said Mr. Duterte wants such overt assault drills to be discontinued.

No change in cooperation

In Washington, Adm. Harry Harris, the commander of US forces in the Pacific, said on Tuesday that there was no change so far in US-Philippine military cooperation.

He said US Special Forces were still advising the Philippine military in counterterrorism in Mindanao, US surveillance aircraft had continued rotational deployments at Clark Air Base, and plans for enhanced defense cooperation agreed by the previous Philippine administration remained on track.

“There are five Philippine bases that they have agreed to allow us to use. That hasn’t changed so far and I have no reason to believe that will change. I will know more next week,” Harris told reporters.

He said he would meet in the Philippines with the chief of staff of the Armed Forces, Gen. Ricardo Visaya, next Tuesday to discuss the schedule for military exercises in the coming two years.

He said there could be a “rescoping” of some of the big exercises in 2017.

Mr. Duterte has been antagonistic toward the United States for its criticism of his deadly war on drugs.

He has publicly declared that he would halt all joint combat exercises with the Americans, but later walked back on the threat, sparking uncertainty among Philippine and US officials.

Philippine defense officials said last week that Mr. Duterte agreed to allow a smaller number of exercises after they explained to him the benefits to the Philippines, including its capability to respond to natural disasters.

Live-fire maneuvers are traditionally one of the highlights of the Balance Piston exercise.

Hao said marksmanship events would proceed but would be confined to a camp.

The drills will also include mock sea interdictions, care for combat casualties and “combat” swimming drills, he said.

“This is an annual training event to test the basic warfighting skills of our soldiers and to foster an improved relationship of our Armed Forces,” Hao told reporters. —REPORTS FROM AP AND AFP