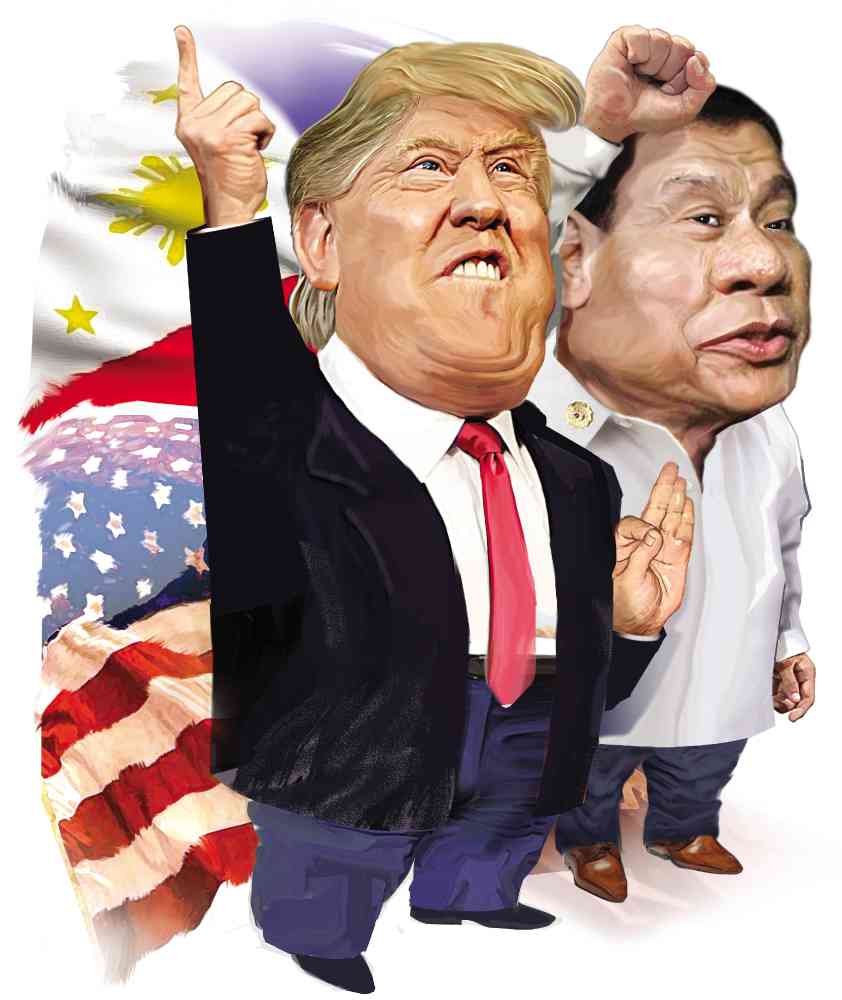 US President-elect Donald Trump and the Filipino firebrand leader, President Duterte, have both managed what many at the onset of their colorful campaigns thought was an impossible task—beat the establishment and win the leadership of the world’s leading superpower and its strategic partner to the East.

Both went up against seasoned politicians, were known for their profanity-laced statements, were ladies’ men and evoked the image of the ordinary bloke next door.

They also reached out to the ordinary voters in their folksy messages, with Trump’s “Make America Great Again” logo appearing to mirror Duterte’s “Change has Come” Filipino-first policy.

Already, political pundits have predicted that the world’s two newest leaders would instantly hit it off, even as the comparisons end where their respective backgrounds begin, analysts say.

While Trump personified America’s wealth, he has never held any public office and his dealings with state policy went only as far as tussles with government regulators, from games to real estate.

Mr. Duterte, on the other hand, packaged himself as the rugged, approachable politician backed by over 20 years of experience who would solve problems in the most practical of ways.

For instance, Mr. Duterte has publicly called out nonperforming officials and vowed that government permits would be issued quicker. It may sound petty, but the amount of time it takes to issue such receipts in the notoriously corrupt Philippine bureaucracy has turned off many investors for years.

And while it may be true that Mr. Duterte, 71,  has successfully cultivated his antiestablishment image, lost in the characterization is his political cunning.

Prior to landing a political career, he was known as a tough prosecutor. Now, his family can be considered a powerful political clan, with his children holding the top two positions in Davao, the largest city in Mindanao. Daughter Sara is the mayor and son Paolo the vice mayor.

He banked on the Filipinos’ frustration over economic disparity, and charged that wealth was spread among the “oligarchs.” To address rampant criminality, he vowed speedy justice by turning Manila Bay into a dumping site for dead criminals.

And frustrated Filipinos appeared to have backed him up,  even as the death of suspected drug dealers and addicts have risen well above 4,000 since he took office in July.

He has repeatedly vowed to triple his efforts and promised that the public would see tens of thousand more deaths.

Trump of the East

Mr. Duterte, now called the “Trump of the East,” has congratulated Trump, 70, and in a recent trip to Malaysia, appeared to relish the comparison. “I would like to congratulate President Trump. Mabuhay ka! (Long live)” Duterte said. “We both love to curse. One little thing, we curse right away. We’re the same.”

He said bilateral and security ties between the two were backed by a “vintage” mutual defense treaty signed in 1951, and stressed that all cooperation and bilateral agreements would be honored.

This was a turnaround from his earlier antagonistic stance,  telling the outgoing US President Barack Obama to “go to hell” and promising to get rid of US troops on Filipino soil by the end of his term.

His gripe was chiefly rooted on the massacre of Filipino Muslims in the south by American soldiers over a century ago, when the former colonial masters were engaged in a pacifist campaign.

What triggered Duterte’s verbal tirade against the US was the strong criticism of his deadly antidrug campaign and allegations of human rights violations.

Trump has not scored well on popular votes, and marches protesting his win have erupted in major US cities the past two days after Hillary Clinton conceded defeat, even as she called for the public to rally behind the new leader.

“Just had a very open and successful presidential election,” Trump said on Twitter on Friday. “Now, professional protesters, incited by the media, are protesting. Very unfair.”

This echoed an earlier complaint that the press have been “unfair” and “dishonest.”

Mr. Duterte has a similar distaste for the press, and once imposed a brief protest by ignoring them altogether. Trump is apparently headed that way too, banning the media from his activities, including a visit to the White House to meet with outgoing leader Obama, shortly after winning the vote.

As with Mr. Duterte’s protest, Trump’s would likely fizzle out, with the latter’s press secretary this early assuaging fears there would be a complete press shutout.

The White House Correspondents’ Association said the decision “could leave Americans blind about his whereabouts and well-being in the event of a national crisis” and warned that banning a pool of journalists to travel with and cover presidential activities was “unacceptable.”

While Mr. Duterte appears to have softened his tone against the US government, which he has repeatedly blasted in the past for questioning his war on drugs, he remains steadfast in his promise to end US troop presence by the end of his six-year term.

But, he has said: “I don’t want to quarrel anymore, because Trump has won.”

Still, the unlikely pairing appears to have caught the attention of the world press, with Rep. Harry Roque, going as far as saying that he predicts that the two men would “hit it off.”

“Because of the similarity to President Duterte, the election of Donald Trump as the 45th president of the United States may be the best thing that has happened to Philippine-US relations,” he said.

Trump, he said, would probably “not escalate” the tension in the South China Sea given his focus on the US economy, he said.

“He may be more protectionist to Chinese goods but will care less about foreign policy,” Roque said.

“I remember Trump in the middle of one of his statements, he said, ‘I will not talk like this after I become president,’” Locsin said on TV. “I remember someone who also said the same thing,” he added, referring to Mr. Duterte.