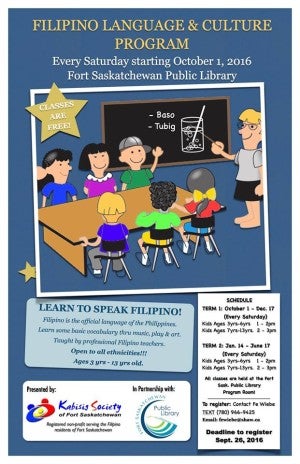 RED DEER, Alberta – English may be their mother tongue, but learning the language of their own heritage is not too late for a community of Filipino-Canadian kids in a locality here.

Kabisig Society of Fort Saskatchewan last month opened its third year of the Filipino Language and Culture Program with 20 enrollees.

Fort Saskatchewan is a community 37 km northeast of Edmonton City.

“The idea was encouraged by the growing number of Filipino children born and raised in Canada,” said Clarizze Truscott, Kabisig Society president. The children who have Filipino parents grow up speaking English, she said.

It helps that the classes are held on Saturdays and for only a few hours, said Hachac. Her five-year-old daughter Eilie again joined this year’s roster of students.

“My daughter enjoys it and she gets to see her friends. She is excited to learn a new language because she is also in the French immersion in kindergarten,” she said.

At home, Gloria and her husband, both immigrants from the Philippines, maintain Filipino as their main language. “We talk to them in mixed Tagalog and English when we are outside,” she said.

“I want my kids to embrace their heritage and know where their parents came from,” she added.

The Filipino language and culture program accepts children between the ages three to 13 years and the classes are held at the Fort Saskatchewan Public Library.

“It was important for these children to connect with their Filipino heritage, culture and the language,” said Truscott.

In the class, everyone is required to speak Filipino including the parents and volunteers.

Volunteer teacher Bernadette Khayog, 30, passed her licensure exam in Hong Kong, administered by the Philippine Consulate there and the Philippine Regulatory Commission in 2008.

The Bontoc, Mt. Province native said the students were quick to learn not only Filipino, but also Filipino values.

“Our goal for our students is to ‘speak and learn’ our Filipino culture and values so that they carry it out in their daily life,” she said, making example of “po” and “opo” as signs of respect.

Their teaching materials – flashcards, textbooks and charts – all came from the Philippines. These are complimented by the technology, such as iPads, utilized in many classrooms in Canada.

A major highlight among the students is their eagerness to learn and speak Filipino. When they use what they learn at home, it becomes a bond for the Filipino families, she said.

This is due to the fact that the students have limited opportunities to experience Philippine culture and apply the native language as much as they could, said Briones.

“By setting good examples that the students could emulate, we are also imparting with them our values,” she said.

The program is divided into two terms, the first runs from October 1 to December 17 and the next, from January 14 to June 17, 2017. The program also welcomes children from other nationalities.