DC area Fil-Ams wrap up History Month with a bang

For the second year in a row, the White House hosted a celebration of Filipino American History Month on October 24, which included a briefing on immigration, health and veterans issues. CONTRIBUTED.

WASHINGTON, D.C.–Despite their unique history in the U.S., their large numbers and significant contributions to this country’s rise as a global power, Filipino Americans have struggled over the years to gain recognition and more visibility in this country.

To change their image as “Forgotten Asian Americans” and assert their presence in American mainstream, the Filipino American National Historical Society (FAHNS) in 1982 started pushing for official recognition of October as Filipino American History Month (FAHM).

To that end, Congress passed a law in 2009 and President Obama has since issued proclamations honoring Filipino Americans for their role in “shaping the very fabric of this great nation.” 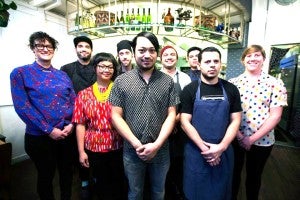 This year, Filipino Americans rejoiced at yet another sign that perhaps mainstream America may finally be coming around to giving them their due, thanks to their growing influence on America’s palate

In early October, American food magazine Bon Appétit hailed Bad Saint the Second Best New Restaurant in 2016 – making it “the hottest Filipino restaurant in the country.” The 24-seat, walk-in-only eatery opened last year in this city’s Columbia Heights, about two miles away from the White House.

“Filipino food is really hot now,” said Hank Henderson, president of the US-Philippine Society, at a recent symposium hosted by the Philippine Embassy. Henderson was simply stating what everyone in the audience already knows about a burgeoning Filipino food movement: that Philippine cuisine has permeated the fine dining scene and is steadily evolving to be the “darling of diners” in the United States. 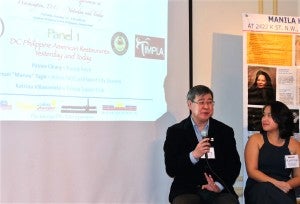 Last May, Philippine cuisine even won top culinary honors for the first time. The Embassy’s Public Diplomacy Officer Darell Artates recalled that the Embassy joined the Embassy Chef Challenge, which brought attention to the Flavors of the Philippines.

“Apart from the taste and the presentation of the dish, the guests at the Challenge raved about the joie d vivre that permeated the Philippine entry into the top culinary competition,” Artates said. The Philippines bagged the People’s Choice Award.

The next big thing

In the Washington, DC area, this trend is credited to enterprising Filipino Americans, like Bad Saint’s co-founders Genevieve Villamora and Tom Cunanan, and Patrice Diaz Cleary, owner of Purple Patch – another new Filipino restaurant in the district. Their efforts in making lumpia and adobo as the “Next Big Thing in American Food,” have gotten rave reviews from renowned food critics.

As a way of closing out Filipino American History Month on an upbeat note, organizers of The Istorya-DC 2016 Symposium focused on Filipino food and its recent popularity in the Washington D.C. area. 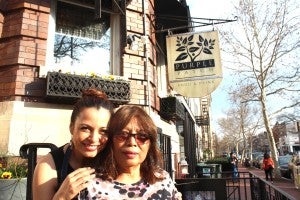 Patrice Diaz Cleary (left) and her mom pose in front of Purple Patch in DC’s Mount Pleasant neighborhood, one of the most diverse areas in the nation’s capital. JON MELEGRITO.

Istorya-DC is an annual, educational gathering to share the histories, stories, and research about DC area Filipinos and their communities. It was led by the Rita M. Cacas Foundation, which aims to raise awareness of Filipino American history and preserve the stories of early pioneers. “I’m a native Washingtonian and the daughter of an early pioneer, and yet it wasn’t until I started searching them out that I began to understand their amazing, and yet perfectly American, story,” says Cacas, the foundation’s president. “The histories of the first Filipinos in the DC area are still largely unknown.”

And so is the history of Filipino food in the DC area.

Panelist Andrei O’Connor (who majored in anthropology at The College of William and Mary) writes in her 2010 thesis, “Nanay’s Kusina or Carinderia? The Perceived Lack of Filipino Restaurants in American Dining”: “Our experience of eating Filipino food was relegated to our families’ cooking or Filipino American community picnics or events where the food was catered from these mysterious Filipino restaurants. 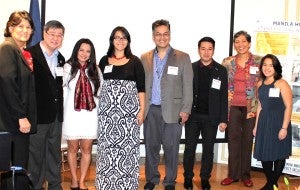 “Originally I believed the main cause of the ‘lack’ of Filipino restaurants was food itself—perhaps it was not as exotic as Vietnamese or Thai food, or maybe Americans just could not stand to pick through hundreds of fish bones or to peel off the delightfully squishy pork belly fat. Surely this was a problem with mainstream American society: Filipino food was not appealing to Americans, and therefore Filipinos were discouraged from opening restaurants, because they found there was no market for their food. If only Americans were more accepting of Filipino cuisine, then there would be more restaurants!”

In her thesis, she cites comments from persons she interviewed on why Filipino food was not as popular as other Asian cuisines: “Maybe there was just not enough pride in the food initially. Because maybe some Filipinos tend to look east more, west more, than look at what they can offer,” said one. Another, a Filipino chef, implied that mainstream Americans do not usually find Filipino food appetizing, “that’s why she had to adjust the amount of bagoong that she included in her dishes, lest its pungent flavor and smell be off-putting to her customers.” O’Connor then notes that “Filipino restaurant owners seemed to accept that they were not (and probably would never be) part of white mainstream America, and that their market revolved around niche communities.” 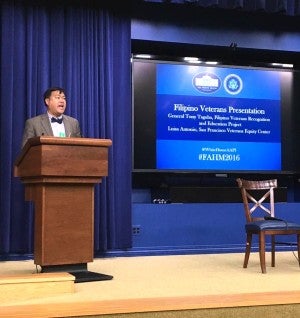 A Filipino couple who once served as diplomats in Washington D.C. weighed in: “Perhaps some savvy presentation, a little clever local adaptation, and a good business model could encourage the growth of more Pinoy restaurants abroad that will attract a broader popular clientele.”

Today, Filipino food, finally, has its moment. “It’s long overdue,” says Cleary, who is proud of introducing Filipino fine dining in the nation’s capital. Purple Patch, she says, is “a gateway, because lots of people don’t know our food. And when they taste it for the first time, they go ‘wow, this is really good.’ Our time has come.”

Mike Coronado Reyes of Springfield, Virginia, was among the more than 100 guests who attended the symposium. What he learned, he said, is that this new breed of restaurants serve more Filipino American fusion food than the “traditional food,” that the cuisine is “centered around the taste and experience of the chef and tailored to the mainstream audience,” and that Filipino restaurant owners have a different business mindset. He notes that Purple Patch, Bistro 7107 and Bad Saint are not located in traditional Filipino American communities.

Since it opened last year, Purple Patch has become a popular gathering place for Filipino American millennials. “Patrice has been very inviting to us and allows us to use her restaurant as a community space for meetings and celebrations. Purple Patch feels like our Manila House or Cheers, an extension of our home and the side room is our living room. And we’re proud to tell the whole world to come here and feast on Filipino cuisine.”

A week before the Embassy symposium, chants of “Filipino! Filipino!” reverberated at the White House FAHM celebration as Apl.de.ap took the stage rapping in Tagalog and getting the more than 150 participants on their feet, swaying and stomping. Filipino pride was clearly alive.

Like getting them elected to Congress and appointed to high offices. There’s only one state representative in California, which has the largest concentration of Filipinos in the country, and none in Nevada, which has the fastest growing Filipino population in the U.S.

In the media, negative perception of Filipinos still persists. “We need to really assert our presence and let our voices heard so no one picks on us for ridicule and abuse,” says Gloria Caoile, a labor leader and civil rights advocate. “The challenges ahead require us to be loud, proud and lead without a doubt.”

“So, here we are, in 2016, and we are still fighting the same fight,” notes Filipino American Psychology Professor E.J.R. David. “Despite our significant contributions to the Asian American community, and our unique struggles with racism, immigration, health, and in other areas (e.g., education, income, etc.) that challenge the ‘model minority myth,’ we are still ignored and rendered irrelevant. Marginalization still happens today.”

David was reacting to a recent New York Times documentary about the “Asian American” experience, which featured a dozen Asian Americans but not one Filipino. 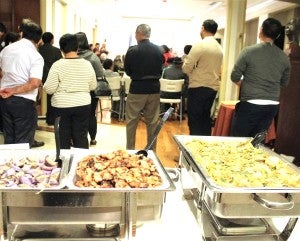 Filipino food donated by area restaurants waits to be served as a standing-room only audience listens to a panel of Filipino-oriented taste makers and restaurateurs. JON MELEGRITO

The painful irony was not lost on David who criticized the Times in an open letter: “You did this during Filipino American History Month ― the month when we are supposed to be most proud of our brown presence in the U.S. The continued failure to include us whenever you talk about Asian Americans is extremely insulting. But the pain you inflicted on us with your continued disregard is real. It clearly tells us, once again, that we are unseen, unheard, and unappreciated in this country.”

David’s point about mainstream media was echoed a month earlier by Filipino American leaders who criticized NBC for trying to develop a comedy show about mail order brides from the Philippines. A strong public outcry against NBC for promoting offensive stereotypes about Filipinos forced network producers to cancel the project.

In 2007, following a nationwide protest by Filipino American community leaders and health professionals, ABC was forced to remove from all its platforms an episode in its sitcom “Desperate Housewives,” which disparaged Filipino doctors.

With a growing number of second and third generation Filipino American activists and advocates taking up the cudgels for their community, there’s every indication that Filipino American empowerment is indeed moving forward, albeit slowly, to “shape the very fabric of this great nation.”

The campaign to officially recognize Filipino World War II veterans, for instance, may soon culminate in a long-awaited victory for the 260,000 soldiers who fought under the American flag but were humiliated when Congress passed the 1946 Rescission Act. A formal vote to award them the Congressional Gold Medal is expected before the end of the year. 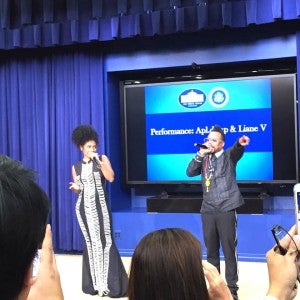 But the veterans’ long struggle for recognition, which is now in its 72th year, angers sons of veterans like Maj. Gen. Antonio Taguba, who is leading the fight. “Every minority group who fought in the war, like the Japanese American Nisei warriors and the Tuskegee Airmen, have received this award except the Filipinos,” he said. “This is long overdue.”

“The work to officially recognize our Filipino WII veterans has been a central part of my career in social justice advocacy for the last ten years, has been part of my involvement in Washington, DC’s Filipino American community for the last 20 years, and has, with or without my knowing, been part of who I am as a Filipino American my whole life,” writes activist Ben de Guzman in a Huffington Post blog.