HONOLULU —A roundtable hosted by Rep. Tulsi Gabbard (Hawaii-02) Nov. 1 with leaders from Hawaii’s Filipino community gave an update on the legislation she introduced to award the Congressional Gold Medal to Filipino Veterans of World War II.

The bill, (H.R.2737), recently crossed a critical milestone and is closer to passage than ever before, after decades of attempted recognition for Filipino World War II veterans.

“Congressional Gold Medal bills require two-thirds of the House, or at least 290 members, to sign on to the bill before it can move forward,” Gabbard explained.

“I’m happy to report to you today,” she announced, “that we’ve exceeded this with 309 co-sponsors, with colleagues representing both parties and nearly every state and territory in our nation supporting legislation to recognize these men for their service and sacrifice.”

Gabbard said further: “Despite their critical role in the Pacific, Filipino World War II veterans have never been recognized by Congress for their service. We’ve waited far too long to recognize these heroes alongside units like the Tuskeegee Airmen and Hawaii’s own 442nd/100th Infantry Battalion with the Congressional Gold Medal. With just 18,000 Filipino World War II veterans alive today, time is of the essence for Congress to pass this legislation and honor these courageous men with the long overdue recognition they deserve.” 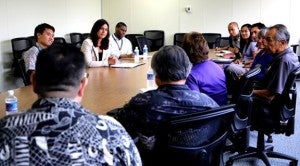 Last year, Gabbard introduced bipartisan legislation (H.R.2737) to award the Congressional Gold Medal to World War II Filipino veterans. The bill acknowledges over 200,000 Filipino and Filipino-American soldiers who responded to President Roosevelt’s call-to-duty and fought under the American flag against the Imperial Forces of Japan during World War II.

Up to 305 Members of Congress have signed on as co-sponsors of the congresswoman’s bill, and she is working with House leadership to schedule it for a vote. With support from Hawaii’s Filipino community and organizations across the country, Gabbard hopes to pass the legislation before the end of the year.