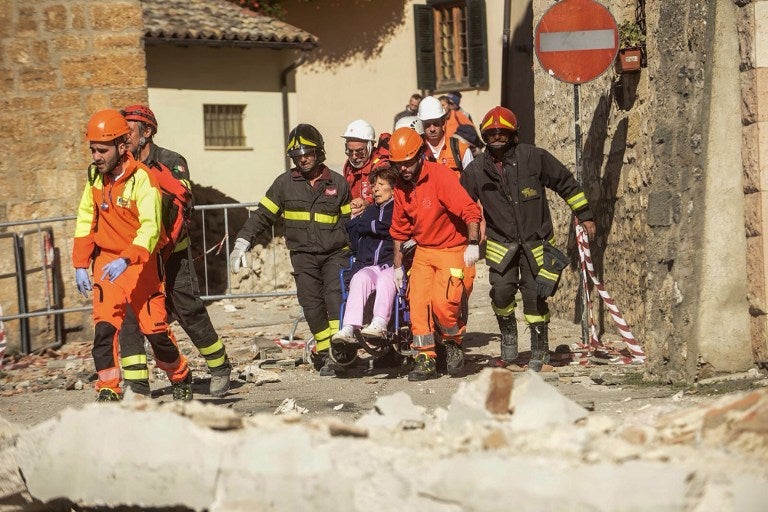 Firefighters and rescuers carry a woman on a wheelchair after a 6.6 magnitude earthquake on October 30, 2016 in Norcia. It came four days after quakes of 5.5 and 6.1 magnitude hit the same area and nine weeks after nearly 300 people died in an August 24 quake that devastated the tourist town of Amatrice at the peak of the holiday season. / AFP PHOTO / Fabrizio Troccoli

Nine Filipino families were successfully evacuated from a town near the epicenter of the powerful 6.6 magnitude quake that shook Italy on Sunday, according to the Department of Foreign Affairs (DFA).

“They are currently sheltered at the Casa Per Ferie Rogate in Rome. The Embassy arranged full board and lodging,” Jose said in a text message.

The DFA earlier confirmed that no Filipinos were hurt in the quake that ruined historical and religious structures and left about 3,000 temporarily homeless.

It was the strongest quake to hit Italy in nearly 36 years, and third to hit the country in two months, following jolts last week and a destructive one in August that killed about 300 people. JE/rga

Read Next
‘No written deals on Filipinos’ return to Scarborough’
EDITORS' PICK
Malls, parks in NCR still off limits to minors even with eased restrictions
Next level mobile photography within reach with vivo X70 co-engineered with ZEISS
Delivering delight against all odds
Lacson wants DOF to suspend TRAIN law as oil prices rise
153 protests filed vs China actions in PH waters in 2021 — DFA
Leaked: A 60x Zoom and all-new Helio G96 mean a complete overhaul for TECNO Mobile’s new CAMON 18 series
MOST READ
Robredo to supporters: Be calm, gentle and do good deeds
Matibag calls Senate budget hearing ‘political,’ gets kicked out
Drilon: Tax and then ban Chinese firm in pandemic funds mess
Colmenares denies Makabayan is supporting Pacquiao
Don't miss out on the latest news and information.