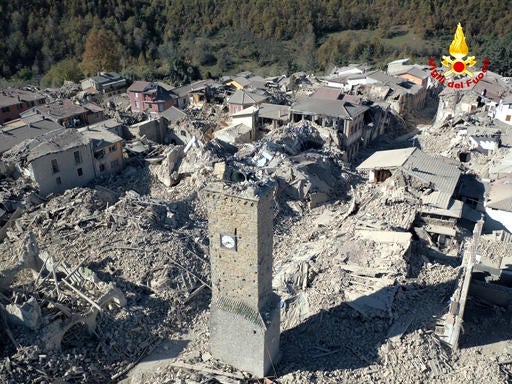 An aerial view of the destroyed hilltop town of Amatrice as an earthquake with a preliminary magnitude of 6.6 struck central Italy, Sunday, Oct. 30, 2016. A powerful earthquake rocked the same area of central and southern Italy hit by quake in August and a pair of aftershocks last week, sending already quake-damaged buildings crumbling after a week of temblors that have left thousands homeless. (Vigili Del Fuoco/Italian Firefighters via AP)

There were no Filipinos hurt in the powerful 6.6 magnitude earthquake that shook central and southern Italy on Sunday according to the Department of Foreign Affairs (DFA).

In a text message to INQUIRER.net, DFA spokesperson Charles Jose said that the Philippine Embassy in Rome has confirmed that there were no Filipino casualties in the most powerful quake to hit Italy for the past 36 years.

“The Embassy continues to closely monitor the situation to make sure that all Filipino nationals in the area are safe,” Jose said.

The quake was the third to hit Italy in two months, following jolts last week and a destructive one in August that killed about 300 people.

It toppled historic religious edifices and left about 3,000 people temporarily homeless. No fatalities were reported. IDL?/rga

Read Next
Ex-LA cop backs antidrug drive
EDITORS' PICK
Pagasa: Warm, sunny Sunday in most parts of PH
Is it safe to talk politics again at family gatherings? ‘The Reconciliation Dinner’ shows us what that’s like
House energy committee chair Arroyo bats for cheap electricity
EDITORIAL: To a bike-friendly future
The Best Tech Gifts For The 2022 Holidays
vivo’s coming to town to grant wishes with more holiday promos
MOST READ
LOOK: Vhong Navarro transferred to BJMP detention facility in Taguig
The Elephant Man in the Senate
Posh village as ‘shabu’ haven
LOOK: Zanjoe Marudo bonds with Ria Atayde, her family
Don't miss out on the latest news and information.