The Red House of Horror

Photo and video by Tonette Orejas

CANDABA, PAMPANGA—Maria Quilantang Lalu, 80, simply calls it “Bahay na Pula” (Red House). But 18 stanzas of a song she composed with Malaya Lola (Free Grandmothers), a group of women raped by Japanese soldiers during World War II, describe it as a “house of horror.”

(When they were sated, we were set free
Our life almost gone because of the savagery we endured,
Our minds and bodies broken.)”

Aptly enough, the song is sung in the style of “pangangaluluwa,” hymn-offerings to the dead.

Owned by the Ilusorio family, the stately mansion painted red was turned into a garrison by Japanese soldiers stationed in Barangay Anyatam in San Ildefonso town, Bulacan province.

It lies less than 2 kilometers south of the village of Mapaniqui here, where war atrocities began in November 1944.

On Nov. 23, 1944, the Geki Group of the 14th District Army under Japanese Imperial Army Gen. Tomoyuki Yamashita attacked Mapaniqui, a suspected bailiwick of Hukbo ng Bayan Laban sa Hapon, the armed wing of the old Communist Party of the Philippines.

Based on the accounts of Malaya Lola, the Japanese soldiers pillaged and burned the entire village, after which they rounded up men and boys, severed their sexual organs, and forced these into the mouths of the victims.

When the massacre was over, the corpses were thrown into a large pit and set ablaze.

All these acts of brutality took place in full view of the village’s grandmothers, mothers, aunts, sisters, wives and daughters.

Around 200 girls and women were forced to carry the Japanese loot to Bahay na Pula, where the sexual abuse commenced.

Girls who had not yet begun menstruating saw no respite from sexual abuse, according to the Asian Center for Women’s Human Rights, which documented the cases and brought them to the attention of an international war tribunal.

Pairs of mothers and daughters were raped in the same room.

The women broke their silence in August 1996, four years after Maria Rosa Luna Henson made public her ordeal as a “comfort woman.”

Seventy-two years after the atrocities, the Japanese government has yet to issue an apology.

Nor has it set aside compensation for the women. “There’s still no justice until now,” said Pilar Galang, 81.

Death has thinned the ranks of members of Malaya Lola in the last 20 years. From 96, only 32 now survive.

Twenty of them can no longer walk or leave their homes, hampered by age, hypertension, diabetes, tuberculosis, asthma, arthritis and other ailments.

The stronger ones, like Lalu and Januaria Galang Garcia, have stopped venturing near or inside Bahay na Pula since it has been stripped of its narra floors and walls, as well as its wrought-iron windows and doors.

But the memories of the horrors inside the house remained fresh for the women, among them Rosario Bucu who, traumatized by the abuses, has remained single.

Every All Souls’ Day, the women try to purge the pain of war by lighting candles before a solitary tomb behind a school building, said Malaya Lola leader Isabelita Vinuya.

The grave contains the bones of men and boys massacred in the village 71 years ago.

When the singers in the group—Lalu, Galang, Garcia, Vinuya, Francia Buco, Emilia Mangilit, Belen Culala, Belen Sagum, Leonor Sumawang, Ceferina Turla, Petronila de la Cruz and Felicidad Turla—are present, they hold a concert, singing any of the 10 songs in the CD album produced for the Malaya Lola campaign in 2007. 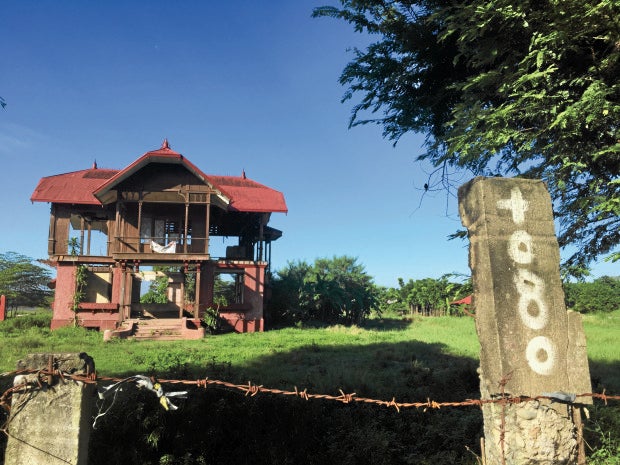 SETTING FOR WAR CRIMES In 1944, some 200 women and adolescent girls were turned into sex slaves inside this stately red mansion turned into a garrison by Japanese soldiers in San Ildefonso town, Bulacan province.

Then as now, the words in the song, “Malaon nang naghihintay” resonate, as they speak of time, age and frailty crushing the women’s hopes of getting justice.

Although private individuals in Japan formed the Asian Women’s Fund (AWF) through which Japan gives humanitarian projects to “extend atonement and support” for aging victims, members of Malaya Lola said they had not received money, not even for medicines or medical care, from it.

The AWF, they said, did not categorize the Mapaniqui women as jugun ianfu (comfort women), or women confined for an extended period in facilities for sexual slavery.

Said Vinuya: “Rape is still rape whether it was done for days, for months or for years. The effect is the same. It destroyed our bodies, our sense of self. We lived in shame for years.”

Despite Japan’s noncommittal stand on their case, Malaya Lola welcomes young Japanese visitors who come to the village to apologize for the abuses of their government.

Others, like Ceferina Turla who has eight grandchildren married to Japanese citizens, have accepted them into her family. A niece of Vinuya works in a Japanese factory.

But things have not been as rosy on the legal front. In 2014, the Supreme Court denied the motion for reconsideration filed by Malaya Lola to declare the Philippine government guilty of grave abuse of discretion for refusing to espouse their claims for war crimes and crimes against humanity.

The horror goes on.