Aerial surveillance shows Chinese Coast Guard ships are still guarding the disputed Scarborough Shoal, but Filipinos are seen fishing there “unmolested” for the first time in years, according to Defense Secretary Delfin Lorenzana.

Lorenzana on Sunday said the return of Filipino fishermen to the shoal was “a most welcome development.”

Malacañang last night described as “good development” reports that Filipino fishermen had been allowed to freely enter and fish in the contested Panatag Shoal.

“The Palace welcomes the good development for our fishermen at the Panatag Shoal,” Presidential Communications Secretary Martin Andanar said in a text message to reporters.

Senators also welcomed the development but an opposition lawmaker in the House of Representatives wanted Malacañang to disclose what President Duterte and Chinese President Xi Jinping had discussed about Scarborough Shoal that allowed Filipino fishermen to return to the rich fishing ground after years of being driven away by the Chinese Coast Guard.

A Philippine Navy plane spotted four Chinese Coast Guard ships, contradicting an initial report that the Chinese have left, according to the defense secretary.

A group of Filipino fishermen recently returned from Scarborough with a bountiful catch. Fisherman Gila Bauya said the Chinese Coast Guard was there but ignored his group’s presence. 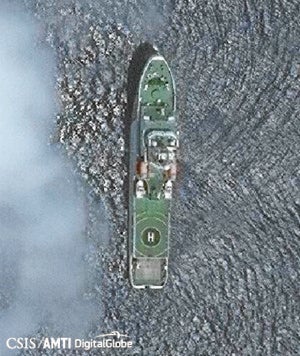 CHINESE PRESENCE A Chinese Coast Guard ship is seen near the disputed Scarborough Shoal in this aerial photo provided by the AsiaMaritime Transparency Initiative.

China seized Scarborough (known locally as Panatag Shoal or Bajo de Masinloc) in 2012 after a two-month standoff with Philippine vessels. It had since driven away Filipino fishermen from the area, which is just 230 kilometers off Masinloc, Zambales.

China allowed access to the shoal after Mr. Duterte reached out to Beijing, meeting Chinese President Xi and other leaders this month.

Mr. Duterte is pursuing a friendlier policy toward China, even strategically announcing in Beijing that he was deviating from the Philippines’ traditional alliance with the United States in pursuit of an “independent foreign policy.”

In July, the Philippines scored a legal victory against China, when an international arbitral tribunal invalidated the latter’s claim to almost all of the disputed waters in the South China Sea. The tribunal also ruled that Scarborough was international traditional fishing grounds.

China has ignored the ruling, asserting “indisputable sovereignty” over the South China Sea.

“I hope it is for real and permanent sans a ‘quid pro quo’ (something in return). If so, it is a powerful gesture of goodwill on the part of the Chinese government,” Sen. Panfilo Lacson said of Filipino fishermen being allowed to fish at Scarborough.

Lacson said the President deserved a pat on the back for the development, even as he said the country should be on the lookout for how Mr. Duterte’s acerbic attitude toward the United States and the European Union would affect the country.

“While he defies political correctness, his gambit, if we may call it that, is paying off,” Lacson said.

Sen. Alan Peter Cayetano, chair of the Senate committee on foreign relations and a close ally of the President, said Mr. Duterte had always given priority to fishermen and other marginalized sectors.

Magdalo Rep. Gary Alejano said the people “need to know exactly what was discussed for the people to understand, for the stakeholders to know, because this [involves] our national interests.”

Alejano pointed out the confusion on whether Mr. Duterte and Xi did talk about Scarborough. “The Chinese side said Scarborough was not discussed,” he said.

He said the fishermen being able to practice their livelihood “without harassment” was a welcome development.

“But I don’t agree with the manner by which it was negotiated. Did he (Mr. Duterte) ask for permission? We really don’t know. And he (Mr. Duterte) has not said anything clearly which has always been his style,” Alejano said.

Kabayan Rep. Harry Roque, a member of the House minority bloc, said there was “nothing in writing yet” when it came to Scarborough. He joined Mr. Duterte’s trip to Beijing as part of his official delegation.

To the question on whether this meant it was uncertain for how long Filipino fishermen could fish in Scarborough, Roque replied: “That is why we need to have something in writing so we can invoke pacta sunt servanda.” It is Latin for “agreements must be kept.”

“The fact that our Filipino fishermen are able to fish anew in Scarborough Shoal is the most important gain of the President’s visit to China and proof that the President’s pivot to Asia has been successful in promoting the right of our fishermen to pursue their traditional livelihood,” he added. —REPORTS FROM AP, TARRA QUISMUNDO AND NIKKO DIZON