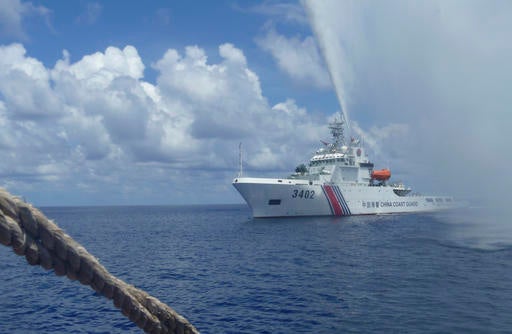 The return of Filipino fishermen to Scarborough Shoal, which China effectively seized in 2012, was “a most welcome development” because it brings back their key source of livelihood, Defense Secretary Delfin Lorenzana said.

China granted access to the tiny, uninhabited shoal 123 nautical miles (228 kilometers) from the northern Philippines after President Rodrigo Duterte reached out to Beijing and met Chinese President Xi Jinping and other leaders this month. After his China trip, Duterte announced without elaborating that Filipinos may be able to return to the shoal soon.

A Philippine Navy plane spotted at least four Chinese coast guard ships around the shoal during a surveillance flight over the weekend, Lorenzana said, adding that an earlier report by the Philippine coast guard that the Chinese had left the area was incorrect.

“Flybys of our planes reported Chinese coast guard ships are still there but our fishermen were fishing unmolested,” Lorenzana told The Associated Press.

It’s unclear how long China would keep the shoal open to Filipinos or if there were any conditions attached.

Duterte made clear that the dispute over the shoal, which the Philippines calls Bajo de Masinloc or Panatag and the Chinese refer to as Huangyan Island, was far from over. He said he insisted in his talks with Chinese leaders that the shoal belonged to the Philippines, but that the Chinese also asserted their claim of ownership.

Since 2012, Chinese coast guard ships had driven Filipino fishermen away from the area, sometimes with the use of water cannons. Farther south in the Spratly Islands, China went on to construct seven man-made islands in recent years despite protests from other claimants and the U.S., which insists on freedom of navigation in what it considers international waters.

The new development brought joy to the first Filipinos who ventured back to Scarborough in flotillas of small fishing boats.

“We’re happy that we were able to sail back there,” said Gil Bauya, who returned Saturday with a huge catch of red snappers and other fish to Cato village in the northwestern province of Pangasinan.

“They just let us fish,” Bauya said, referring to three Chinese coast guard ships fishermen saw at the shoal from a distance. “We were waiting what they would do, but they didn’t do anything like deploying small rubber boats to chase us like they used to do.”

After three days of fishing, Bauya said they ran out of ice to preserve their catch and had to sail back home for the All Souls’ Day holiday. Amid the festive air in Cato, where villagers helped them unload their bumper catch, Bauya said he and his crewmen plan to travel back to Scarborough in the coming week.

Deputy U.S. Secretary of State Antony Blinken told reporters in Beijing on Saturday that China’s withdrawal from Scarborough Shoal would be welcomed by Washington.

He said it would be consistent with an international arbitration ruling in July that invalidated Beijing’s sweeping territorial claims in the South China Sea. The ruling said that both Filipinos and Chinese can fish at the shoal, but China ignored it./rga

Filipino fishermen are back in Panatag

Read Next
We feel you on colonialism, EU tells Yasay
EDITORS' PICK
Leaked: A 60x Zoom and all-new Helio G96 mean a complete overhaul for TECNO Mobile’s new CAMON 18 series
Delivering delight against all odds
Next level mobile photography within reach with vivo X70 co-engineered with ZEISS
Lacson wants DOF to suspend TRAIN law as oil prices rise
Malls, parks in NCR still off limits to minors even with eased restrictions
153 protests filed vs China actions in PH waters in 2021 — DFA
MOST READ
Robredo to supporters: Be calm, gentle and do good deeds
Matibag calls Senate budget hearing ‘political,’ gets kicked out
Drilon: Tax and then ban Chinese firm in pandemic funds mess
Colmenares denies Makabayan is supporting Pacquiao
Don't miss out on the latest news and information.