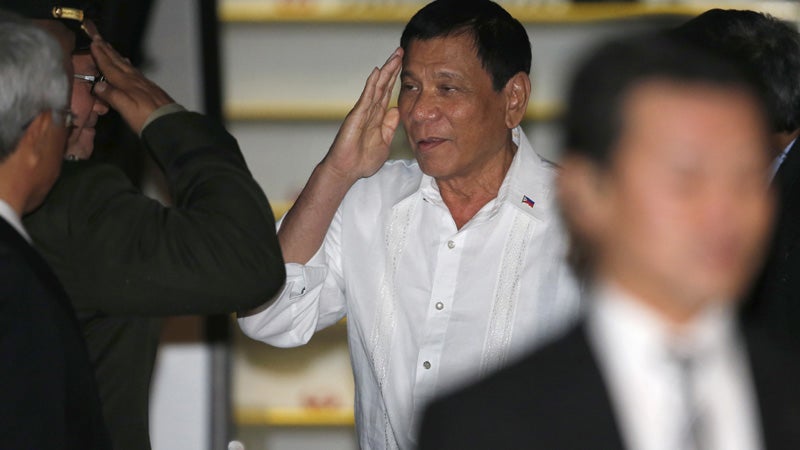 TOKYO—Mind your manners is the unsolicited advice of officials here to President Duterte.

Japanese officials are wary ahead of the arrival of the outspoken Mr. Duterte. Their concern is not only about his foreign policy toward the United States, but also about his informal style.

They are paranoid about him chewing gum in front of the emperor.

Mr. Duterte arrived in Tokyo on Tuesday afternoon for a three-day official visit, his first as Philippine leader and as his recent remarks on foreign policy and freewheeling style have captured international attention.

For diplomats and political leaders, the main issue is his foreign policy toward Washington and how Japan can help mend those ties.

Tokyo is a major ally of the Washington, and has watched as Mr. Duterte increasingly voiced attacks on the United States and said he would scale back America’s military engagement with his country. And he has worried Japan and the United States by reaching out strongly to China.

Foreign Minister Fumio Kishida acknowledged Mr. Duterte’s remarks had triggered concerns and told reporters he planned to ask what his real intentions were when the two have dinner later Tuesday. He said Prime Minister Shinzo Abe would do the same on Wednesday.

“I think it would be important that we fully communicate through these occasions and
directly hear opinions from President Duterte himself,” Kishida said.

But in a country where formality and politeness are highly valued, others are worried about the rough side of Mr. Duterte’s manners.

They are particularly concerned about his meeting with Emperor Akihito on Friday.

In footage of a meeting with Chinese President Xi Jinping, Mr. Duterte wore a business suit instead of a formal Philippine “barong” shirt. He walked in with his hands in his pockets and chewed gum during the handshake and a signing ceremony.

The President doesn’t usually button up the top of his shirt, often wears slacks or jeans and has been seen without socks.

“When (Duterte) will make a courtesy visit to the emperor, his behavior during the event could have a major impact. I trust he understands the consequences and he would not do such a thing (as chewing gum), but I do hope the Philippine side to remind him of that particular point,” Itsunori Onodera, a senior lawmaker in the conservative ruling Liberal Democratic Party, told a Sunday talk show on Fuji TV. —AP