Film on longtime American expat in PH premieres in DC 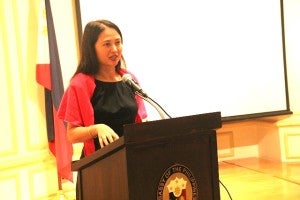 Filmmaker Sunshine Lichauco de Leon answers questions from the audience at a brief Q&A session after the film screening.

WASHINGTON, DC – A film on the life of Jessie Lichauco, a Cuban-born American who settled in the Philippines after a marrying Filipino diplomat, premiered at the Philippine Embassy Oct. 20 for Filipino American History Month.

The documentary film “Curiosity, Adventure & Love” tells the remarkable story of Jessie Lichauco, who became the wife of Filipino diplomat and lawyer Marcial Lichauco in the early 1930s.

Jessie, now 104 years old, continues to live in her family’s residence, which in 2010 was declared a Heritage House, located along the Pasig River in Santa Ana, Manila.

Around 60 guests from Metro DC gathered at the Romulo Hall of the Philippine Embassy for the US premiere of the documentary film, “Curiosity, Adventure & Love” on 20 October 2016.

“Jessie’s life story offers valuable lessons on finding meaning and happiness in every moment, and adopting an ethos of existence based on helping those in need,” said Minister Patrick Chuasoto, the Embassy’s and Chargé d’Affaires ad interim, in his opening remarks.

Being long involved in helping the Filipino people, Jessie was granted Philippine citizenship in 2013 through Republic Act 10356, which was signed into law by then President Benigno S. Aquino III.

Jessie’s granddaughter, Sunshine Lichauco de Leon, is the film’s co-producer, co-director and co-writer. She described the film as a reminder of an individual’s capacity for compassion.

“The inspiration of the film is my grandmother, whose memories put a heart to history, and her more than one hundred years of wisdom and compassion for mankind. Her love for her country and humanity has been inspiration to so many and sharing it means everything to me. In a world where we are only getting busier and more technology driven, she reminds us of the power of love – love of man, of a stranger, or of a country. This film is my past, my present, and the future- both my work and my family, and a tribute to not just my grandmother, but to a way of life,” de Leon said. 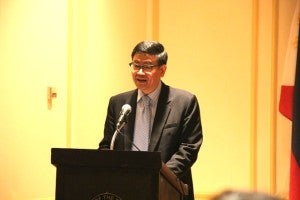 The Philippine Embassy’s Chargé d’Affaires ad interim, Minister Patrick A. Chuasoto welcomes guests to the Romulo Hall of the Embassy for the screening of the documentary film, “Curiosity, Adventure & Love” on 20 October 2016.

The film also pays tribute to the enduring ties between Filipinos and Americans.

“Every day, Filipino Americans make valuable contributions to the growth and prosperity of this country. ‘Curiosity, Adventure & Love’ allows us to see the other point of view – that of an American who chose to make the Philippines her home. The conclusion is that home is not only a place, but more importantly, as the American author James Baldwin had written, ‘an irrevocable condition’ of experiencing a sense of belonging, safety and fulfillment,” Chuasoto told the audience.

“The film also allows the viewers to witness the forging of Philippine-American friendship through the horrors of war and the shared experience of rebuilding for a peaceful and prosperous future. It is a friendship that has withstood the test of time and one that remains unshakeable in the face of new challenges,” he added. 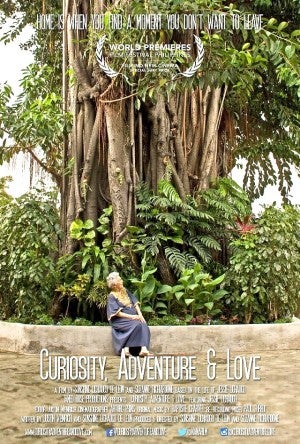 Sunshine Lichauco de Leon expressed the hope that the film would encourage the audience to learn more about Philippine history.

“Many people in the Philippines and America know very little about Philippine history or the importance of the impact of the relationship between the two countries. In fact, many Americans don’t know that it was an American colony. I believe that understanding the past is key to knowing the possibilities of the future and I wanted those who saw the film to both learn and be inspired to learn more about history,” she stated.

The film will be shown next at the following:

In partnership with Asia Society, there will be a week of daily screenings at Rockwell Powerplant Cinemas (Cinema 4) in Makati on 18-25 January 2017.

There will be a Gala premiere screening in early March at the Alex Theatre in Glenndale, CA by the American Museum of Philippine Art. For more information on this event, please send an e-mail to [email protected].

Co-Producers/Co-Directors Sunshine Lichauco de Leon and Suzanne Richiardone will be at the screenings in California.