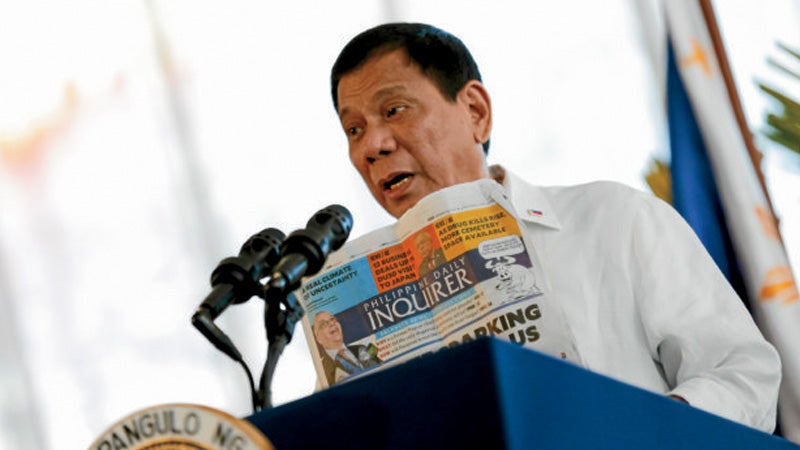 ANOTHER DIATRIBE AGAINST US Before flying to Japan for an official visit, President Duterte was at it again: firing another diatribe against the United States, issuing a veiled threat to revoke the Enhanced Defense Cooperation Agreement and slamming critics of his war on drugs, which has left thousands dead. MALACANANG PHOTO

A day after softening his remarks about a “separation” from the United States, President Duterte on Tuesday lashed out again at the longtime Philippine ally and said Washington could forget a defense arrangement with Manila in his latest jarring statement about the future of the alliance.

“I am not a ‘tuta’ (lapdog) of any country,” Mr. Duterte said as he was about to board a plane for a three-day official visit to Japan, a fellow US ally and big Philippine investor that is becoming nervous about his apparent pivot toward Beijing, a rival power of both Tokyo and Washington.

“You have the Edca (Enhanced Defense Cooperation Agreement), well forget it. If I stay here long enough, I do not want to see any military man of any nation (on Philippine soil) except the Filipino soldier,” he said in a veiled threat to revoke the 2014 executive agreement which allowed US forces, warships and planes to use military facilities in the country.

On the eve of his visit, the volatile Mr. Duterte told Japanese media that he didn’t intend to junk a Philippine alliance with the United States and that he was only seeking to build “an alliance of trade and commerce” with China.

Shortly before his departure for Japan, however, Mr. Duterte voiced outrage over comments made by a top American diplomat for Asia, US Assistant Secretary of State Daniel Russel, who criticized his anti-US tirades and his drug war which has claimed 3,700 lives in four months.

“The succession of controversial statements, comments and a real climate of uncertainty about the Philippines’ intentions have created consternation in a number of countries … Not only in mine and not only among governments, but also growing concern in other communities, in the expat Filipino community, in corporate boardrooms as well,” Russel said after his meeting with Foreign Secretary Perfecto Yasay Jr.

On Yasay’s advice, the President said he agreed to “just shut up” during Russel’s visit which was aimed at clarifying Mr. Duterte’s remarks in Beijing that he was separating from the United States and realigning with China.

But Mr. Duterte said he couldn’t hold back his anger when he read the Inquirer banner headline on Tuesday: “Duterte sparks international distress–US.”

“Son of a bitch. I’m just a small man, how can you be stressed with me? … What do I have to do with Africa? That’s international,” he said, holding up the front page of the Inquirer.

Mr. Duterte also brushed aside Russel’s comments that his fiery rhetoric and crime war were bad for business.

“These Americans are really crazy. Their style is to walk here. They think they are somebodies,” he said.

“Russel says ‘Duterte comments causing worries in business communities.’ Then you (foreign businessmen) pack up and leave. We will recover, I assure you. We will live and survive. We have gone through the worst of times in this planet,” he added.

Russel’s statement that Philippine-Chinese rapprochement should not come at the expense of the United States also piqued Mr. Duterte.

“These fools are really malicious. We didn’t talk anything in China except on the best way to cook siopao and chop suey. If China gives us something, thank you, if there’s none, then don’t,” he said.

The President also pooh-poohed a statement of outgoing US Ambassador Philip Goldberg that the United States was committed to defend the Philippines.

“Who will declare war against us? China? What will they get? They (US) want to talk about the bogeyman war. Stop that shit. Nobody is interested in wars anymore. And if there is a fight, you fight your wars. Do not include mine,” Mr. Duterte said.

He said his aim was out to forge an independent foreign policy “that will not make me subservient to anyone.”

In his departure speech, Mr. Duterte vented his ire at the United States on several fronts—from its bombing of Manila at the end of World War II to US Embassy officials questioning his intentions when he once applied for a visa to visit a girlfriend.

“You know, I did not start this fight,” he said of his spat with Washington.

Mr. Duterte again slammed US and European critics of the extrajudicial killings and their meddling in his campaign against illegal drugs.

“You are a son of a whore … Do not make us dogs. Do not. As if I am a dog with a leash and then you throw bread far away that I cannot reach,” he said.

Russel left Manila in a confident mood, while US Secretary of State John Kerry spoke to Foreign Secretary Yasay over the weekend, emphasizing strong and stable ties between the allies after Mr. Duterte’s comments raised questions about bilateral relations, the US state department said on Monday.

A state department spokesperson, John Kirby, said the phone call on Sunday prompted Kerry to feel the United States and the Philippines “can work through this.”

He said Washington had seen no practical action by Manila to move away from their longstanding bilateral relations. —WITH REPORTS FROM THE WIRES