PH in awkward place if US, Russia battle over Syria – Alejano 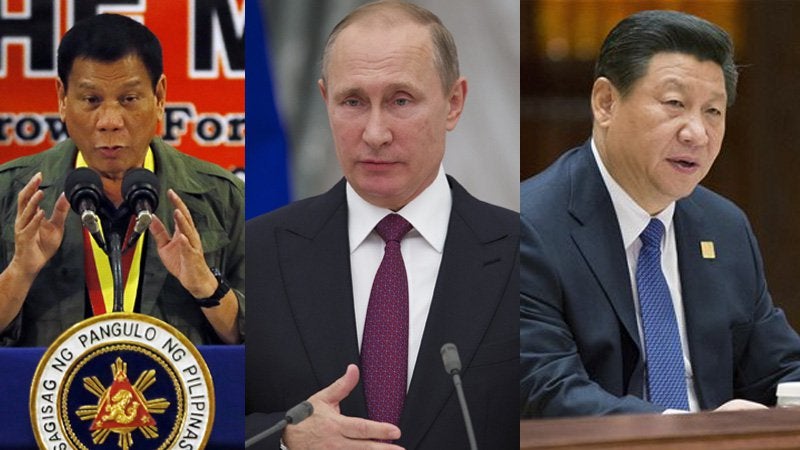 MANILA — The Philippines may be dragged into the simmering discord between two military superpowers —Russia and the United States — as President Duterte makes warm overtures toward Russia and shows animosity toward his country’s treaty ally.

But Magdalo Rep. Gary Alejano reminded the President that the Philippines has been obligated under a treaty to support the United States in the event of armed hostilities between Washington and Moscow, which have appeared headed for another Cold War after the collapse of diplomatic relations over
Syria.

The Russian news agency Sputnik ran a story on Sunday with the headline: “Russia could serve as powerful ‘third force’ between China, US in Philippines,” suggesting that Russia should use Mr. Duterte’s pivot towards China and Russia to expand its influence in Southeast Asia.

“Therefore, it’s necessary to communicate with the president of the Philippines, and to establish greater interaction,” the news agency quoted Ekaterina Koldunova, senior expert at the ASEAN Center of the Moscow State Institute of International Relations, as saying.

“If, as he says, he wants to diversify economic ties via closer dialogue with China and Russia, in the areas of telecommunications, logistics, infrastructure, it would be a sin not to use this opportunity,” the analyst added.

During his state visit to Beijing last week, Mr. Duterte announced he would be “separating” from the United States and aligning himself with the “ideological flow” of China and Russia. He later clarified he did not mean a severance of ties with the US.

In remarks made at a press forum last week, Alejano, a former junior rebel officer now allied with an independent minority faction in the House of Representatives, expressed concern about the increasingly uncertain relationship between Russia and the United States.

“We are in a volatile situation, because it appears that Russia and the United States are having a proxy war in Syria. It might escalate into something,” he said.

Relations between Washington and Moscow have been strained over the bloody civil war in Syria, where the latter has been backing the regime of Syrian dictator Bashar al-Assad, and the latter’s annexation of Ukraine’s Crimea peninsula.

Alejano said it has become obvious that Russia wished “to make a comeback even if its economy is not good.”

“[Vladimir] Putin wants to be recognized as a co-player in global affairs,” he said.

But he said prioritizing economic ties with Russia over the United States might be “disadvantageous” on the part of the Philippine government, considering its oil-based economy and “closed” immigration policy.

On Sunday, the London newspaper Daily Telegraph, quoting military and foreign policy experts in Moscow, said Russia and the West have entered a “new Cold War” as a result of growing confrontations across the globe. 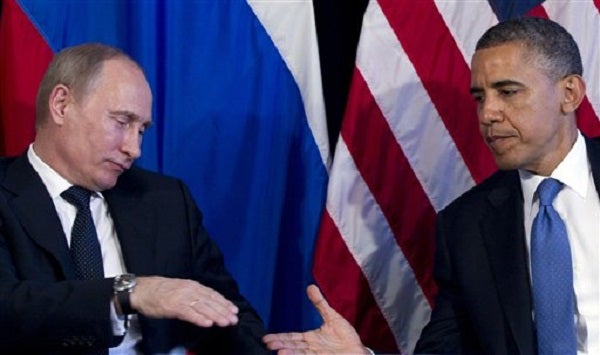 FILE – In this June 18, 2012, file photo President Barack Obama and Russia’s President Vladimir Putin, left, shake hands during their bilateral meeting at the G20 Summit in Los Cabos, Mexico. In a few days’ worth of opportunistic diplomacy, Vladimir Putin has revived memories of an era many thought long gone, where the United States and Soviet Union jostled for influence in a Middle East torn between two powers. Whatever happens with its proposal to relieve Syria of chemical weapons, Russia reemerges as a player in the region _ and one who does not easily abandon allies. That’s meaningful in a region where America’s dumping of Hosni Mubarak has emerged as a seminal moment _ and it may resonate with Iran, whose leaders are carefully watching the global chessboard as the clock ticks toward another showdown, over their nuclear program.(AP Photo/Carolyn Kaster, File)

“If we talk about the last Cold War, we are currently somewhere between the erection of the Berlin Wall and the Cuban Missile crisis,” the paper quoted Lt. Gen. Evgeny Buzhinsky, a former head of the Russian ministry of defence’s international treaties department, as saying.

Under the Mutual Defense Treaty between the US and the Philippines, “Each Party recognizes that an armed attack in the Pacific area on either of the Parties would be dangerous to its own peace and safety and declares that it would act to meet the common dangers in accordance with its constitutional processes.”  SFM