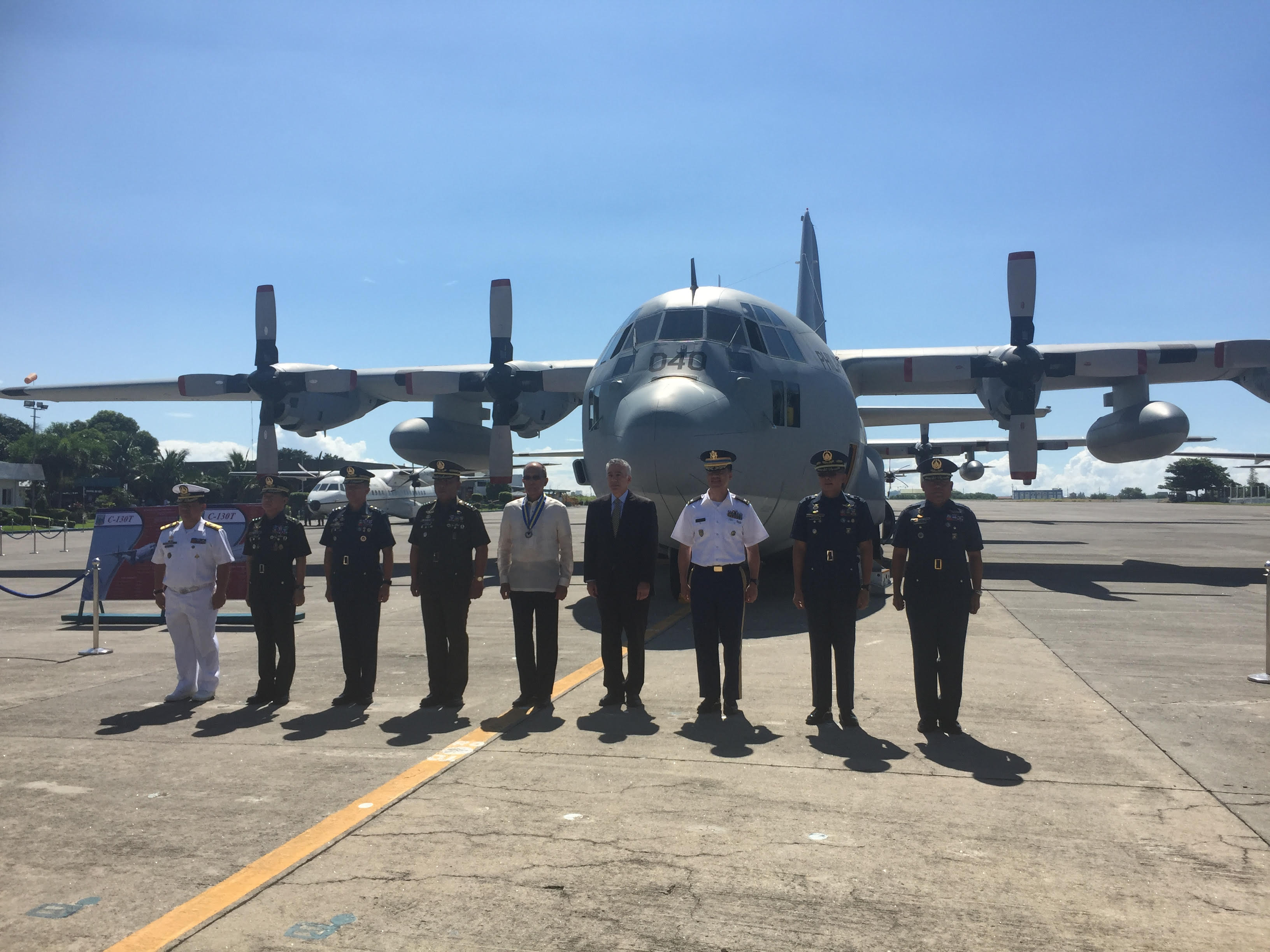 US Ambassador to the Philippines Philip Goldberg stands with Defense Secretary Delfin Lorenzana and top AFP officials at the turnover ceremony of the C-130 cargo plane in Villamor Air Base on Monday. The Philippines acquired two C-130 planes from the US last year under the Excess Defense Articles program at P1.6 billion. The first one arrived last April. FRANCES MANGOSING/INQUIRER.net

Amid strained ties, the Philippine Air Force received its fifth C-130 from the United States on Monday.

US Ambassador Philip Goldberg said the newly turned over C-130 is an ideal example of the US-Philippine partnership.

“This aircraft is a perfect example of how and why our partnership works through procurement or co-investment—the pooling of our assets, our money, our time, our talent. That’s what partnership is all about,” he said in his speech at the turnover ceremony in Villamor Air Base in Pasay City.

Goldberg told the audience that the C-130 is “the backbone of your Air Force” and is relevant in disaster response.

He recalled that when Supertyphoon “Yolanda” (international name: Haiyan), the world’s strongest storm on record that struck the Philippines in 2013, the C-130 was used in transport of evacuees and relief goods.

“Three C-130 in your possession flew missions round-the-clock along with C-130 from US and other nations to deliver tons of relief supplies and evacuate thousand of people affected by the typhoon,” the ambassador said.

The refurbished C-130 is the second of the two planes bought from the US at P1.6 billion through the Excess Defense Articles program under the previous administration. The first one arrived last April.

Goldberg said that the Philippines and US have been close partners for 70 years.

“Our alliance is a 70-year history built on mutual respect and admiration. We are partners, we are friends, we are allies,” he said.

His statements come amid President Rodrigo Duterte’s stance against the US, who has questioned the alliance with the treaty ally several times in his speeches.

READ: Amid Duterte riff, PAF gets C-130 cargo plane from US

Air Force chief Lt. Gen. Edgar Fallorina said in his speech that the turnover symbolizes the Philippines’ relations with the US.

“It has served as a steady anchor in our recognition of the interlocking linkage between peacekeeping and peace-building towards lasting peace, security and development, not only in the Asia Pacific region, but globally,” he said. RAM/rga