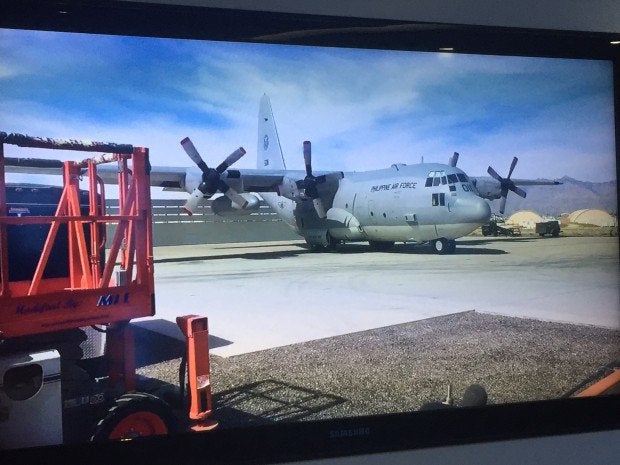 Two second-hand C-130 transport planes from the United States are scheduled to be delivered this year. The two assets will give a boost to the territorial defense and humanitarian assistance operations of the Philippine military. INQUIRER PHOTO

The fifth US Lockheed C-130 transport plane to be acquired by the Philippine Air Force will arrive in Cebu on Sunday.

The plane will touch down at Benito Ebuen Air Base in Mactan, Air Force spokesperson Col. Antonio Francisco told reporters on Thursday.

The plane took off Thursday morning from Davis-Monthan Air Base in Tucson, Arizona.

The C-130 plane will boost the Air Force’s capability in humanitarian assistance and disaster response, as well as transport of troops, relief goods and equipment.

READ: 1 of 2 second-hand C-130 transport planes to arrive next week

The refurbished C-130 is the second of the two planes bought from the US at P1.6 billion through the Excess Defense Articles program. The first one arrived last April.

The number of C-130 planes in the Air Force inventory will be increased to five after the latest C-130 arrives. Other transport planes of the Air Force are three C-295 airbus and three Fokker F-27.

Philippines to ask US for excess military hardware

‘Till COVID do us part:’ Love for wife proven to the last breath

PAL wants deal with creditors before filing for bankruptcy