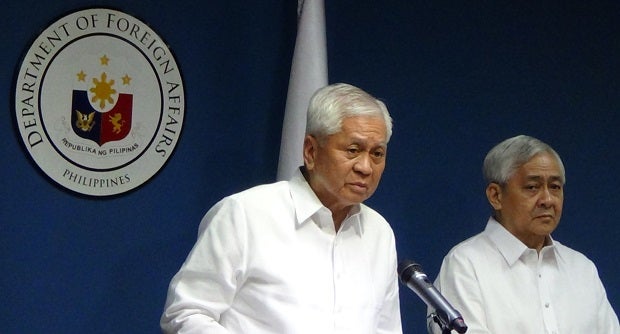 While heading the Department of Foreign Affairs over the last five years, our firm belief was that it was necessary for the Philippines to effectively assert its rightful place in the community of nations.

As a responsible nation, we sought further to make a contribution to maintaining a rules-based international order.

Under the leadership of the previous administration, we pursued with the greatest of vigor the three pillars of Philippine foreign policy:

To enhance economic diplomacy; and

To protect the rights and promote the welfare of overseas Filipinos.

These pillars were strategically advanced by a foreign policy that was principled, independent and in accordance with the rule of law for which we had renewed the confidence and earned the respect of the international community.

It has recently been perceived that our foreign policy had seemingly gone off-track.  Since there appeared to be a lack of clarity from the incumbent administration on what a principled and independent foreign policy should be, please allow me to respectfully expand on what I think it is and what it is not.

That is why we stood for what is right; and that is why we defended what is rightfully and legitimately ours using peaceful means in accordance with the rule of law.  That is also why we identified ourselves with states which observe and adhere to rules-based international norms.

That is why in addressing the most critical security issue in our region, the Philippines positioned itself to successfully demonstrate that “right is might” and international law is the great equalizer among states.

Compelled by the law

Thus, we trust and have been given the assurance that our government will not overlook the fact that it is compelled by the law of the land to fully address The Hague’s arbitral award under the 1982 UN Convention on the Law of the Sea.

Having said what a principled and independent foreign policy should be, we would also like to dwell on what it should not be.

A principled and independent foreign policy is not about appearing to be driven by a possible bias or when it is advanced as a “zero-sum game” so that a close alliance, or valued partners and friends are suddenly cast aside to favor another state.

This is most difficult to comprehend since the perceived favored state has clearly and consistently exhibited, and continues to demonstrate assertive behavior while blatantly violating international law to the grave disadvantage of the Philippines and to the detriment of our national interest.

Our foreign policy is not principled and independent when we threaten to burn bridges with our close friends who have historically stood with us during difficult times, since relations with old partners can coexist with any new ones we may seek.

For that matter, the friends we distance ourselves from today may be the very ones from whom we may need help tomorrow.

With the possibility of bridges being burned, our foreign policy is not principled and independent when we may not know what the end game would be if our newfound friend turns out to be other than expected.

Surely, our foreign policy is not principled and independent if we believe that the Philippines can exist in isolation amid an increasingly complex yet interdependent world.

At day’s end, our foreign policy is neither principled nor independent unless we are able to respond to this fundamental question: Where is the wisdom if we are appearing to place all our bets on the integrity and credibility of our northern neighbor—especially one, in particular, that vehemently rejects adhering to the rule of law?

As our President is embarking on state visits, we have seen from the news that he has reaffirmed the importance of the arbitration award and said that he would not “barter” it away.

This is an important and timely step in upholding the country’s commitment to the rule of international law in the conduct of relations between nations.

It may be worthwhile for our government to ensure that we have conveyed our gratitude for the support received from the responsible community of so many nations for our upholding of international law in order to seek a peaceful solution on our maritime issues.

Let us also consider seeking their continued support in encouraging all relevant countries to abide by the arbitration rulings based on international law.

In a multilateral setting, it is to the ultimate benefit of our entire global village to have a rules-based international order.

Finally, the Philippines should pursue a foreign policy focusing on peace and stability based upon the equality of nations, the rule of law, the peaceful settlements of disputes, respect for human rights and other core principles mentioned earlier.