In choosing our leaders, key standards must prevail

In 1887, the historian Lord Acton wrote a letter voicing his opposition to his fellow authors’ common practice of moral relativism, where the corruption and abuses perpetrated by past and present leaders were whitewashed from the historical record.  It was within this context that he famously quipped, “Power tends to corrupt, and absolute power corrupts absolutely.”

In our modern government, there is a system of checks and balances that prevents absolute power from taking hold.  The Doctrine of Separation of Powers divides authority among three separate branches–the judiciary, legislative, and the executive– and is designed to thwart any one of the triumvirate’s attempts at overstepping their mandates.

To help dissuade any misdeeds by the president and other members of the executive branch, there is the strict rule of law upheld by the courts of the judiciary, and there is also the power of oversight and impeachment by the senators and congressmen of the legislative branch.  It is not surprising that dictators often kick-start their efforts by compromising these two branches through subjugation or collusion.

In the Republic, Plato tells the tale of the “Ring of Gyges,” where a magical ring is found, endowing its new owner with the power of invisibility at will.  Not too surprisingly, this humble shepherd, armed with the new ring, and the ability to get away with anything, went on an epic crime spree, assaulting women and usurping the king’s crown as a treacherous and tyrannical new ruler. 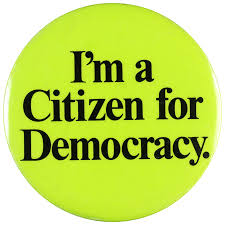 The lesson to be learned here, is that for a system of checks and balances to work, in this case for keeping powerful people in their place, those in power need to know a few things: that they are being watched closely; that they will be held accountable for transgressions; and that their positions of power are contingent on their adherence to basic standards of fair, ethical, and honest leadership.

In a democracy, there is an even more effective force that keeps our leaders in check. It’s called the will of the people, a principle arguably more powerful than any government construct.

The right to vote empowers a majority (or plurality in some cases) to elect, or not to elect, a top executive to their first or subsequent term. Whether or not a candidate is voted into office (or remains in office) is largely decided by a public assessment of performance and persona, which in turn are judged against prevailing standards set by the electorate. And herein lies the crux of the problem.

There can be no guarantee that voters will always apply the appropriate standards when judging a candidate. This is because the public’s take on model leadership evolves as opinions are re-shaped by the cultural and socio-economic realities of the period.  Standards for political experience, skills and platform will invariably change from year to year.

But certainly some things need to remain sacred.

Leaders must be held to at least one unyielding standard, permanently and unconditionally: an unwavering commitment to uphold the fundamental rights and freedoms of all individuals as is clearly stated in the Constitution’s Bill of Rights.

Human decency and the respect of the rights of others is the lowest acceptable bar. Above this standard, we may find many examples of leaders across a wide gamut –from heroes to ineffectual failures.  But a familiar story unfolds any time we condone leadership that ventures below this line. When leaders are absolved of inhumanity, they invariably head toward a despotic and bloody authoritarian end.

The trouble begins when the electorate starts to provide their leaders with exceptions to the rule of law, or accepts from them lapses in their humane treatment of others.

When the majority begins supporting a leader’s oppression of a citizen’s or group’s basic constitutional rights, for whatever purpose whether nefarious or benevolent, then the certainty of justice and its protections are uprooted in its entirety, for everyone.

As the job expectations of any national leader are onerous and difficult, it is not hard to imagine that many who are in positions of power would eventually leverage all advantages and tools made available to them, stopping only before the point at which their own positions or liberties would be compromised.

Thus, misguided leaders who are consistently allowed to skirt the rule of law, or ignore the fundamental rights of their constituents, are generally inclined to continue on that path until their agendas are fulfilled, or absolute power is attained.  History has taught us that it is usually the latter.

In summary, we must have two things to effectively control those in positions of power via the will of the people. First, we need a truthfully informed electorate with the means to keep an eye on current or potential leaders. And second, we need an electorate willing to hold them accountable to certain uncompromising standards.

There are challenges, certainly. In order to keep tabs on our leaders effectively, we need access to accurate information along with a fair and open public dialogue to assess their performance.

Thus, we cannot allow the freedom of speech of individual citizens, groups, or members of the press to be throttled, particularly if they are participating in intelligent discourse or constructive criticism. And we must combat those efforts to tarnish credible media with lies and deceit for the purposes of misguiding the electorate.

And finally, we should fight so that truth and sensibility prevail over the sheer volume of ignorance and hateful rhetoric now diluting what little remains of logic and reason.

If we, the people, fail in any of one of these checks, we will no doubt find ourselves in deep trouble.

But if we tip the balance further by providing our leaders with explicit support (or consent through inaction) for them to operate above the law, under the table and outside the very basic standards of human decency, then we are doomed. The stage will be set for a repeat performance of one of history’s many tales of once-great nations that are no more.