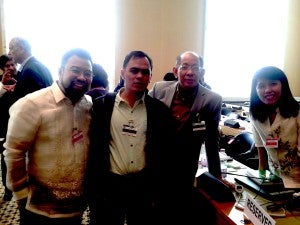 GENEVA — A United Nations committee urged the Duterte administration to strengthen public education in the face of insufficient funding and a widening social divide resulting from increased privatization.

The UN Committee on Economic, Social and Cultural Rights (CESCR) noted the “insufficient” funding for education, “segregation” arising from the privatization drive, and the lack of access to quality education particularly among the marginalized sectors, including the indigenous peoples, children with disabilities and the rural poor.”

The UN committee’s Concluding Observations, released Oct. 11, was adopted during the body’s 59th Session, following a dialogue with Philippine government representatives on Sept. 28 and 29, Several NGOs and international organizations, including E-Net Philippines and the Asia South Pacific Association for Basic and Adult Education (ASPBAE) attended the meetings and presented their respective alternative reports to the Committee.

The report expresses concern over the “insufficient level of resources dedicated by the Philippine government to finance school facilities and qualified teachers, and to ensuring the effective enjoyment of the right to free primary and secondary education for all.”

It further notes the “discriminatory access to education, particularly for disadvantaged and marginalized children,” arising from the imposition of top-up fees to cover the full cost of private education, and the “lack of regulation by State authorities on these (private) schools.”

Committee stresses the need to “strengthen public education sector” by increasing the education budget, improving access to quality education for all “without hidden costs,” and the closer regulation of private schools..

In particular, it asks the government to “review the Education Service Contracting scheme” to address negative effects on the right to education of “disadvantaged and marginalized children and their parents” and to “improve access to inclusive education for children with disabilities.”

It further recommends the implementation of the 2030 Sustainable Development Agenda and the creation of “independent mechanisms” to monitor the SDG progress. It calls for participation, accountability and non-discrimination” in the SDG implementation to ensure that “no one is left behind in the process.” 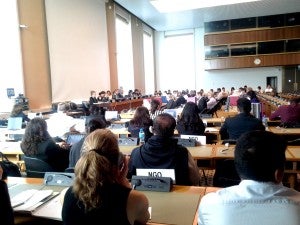 UN dialogue on educaton in session, with Committee members at the center, the Philippine Delegation at the far end and NGO reps on the side. CONTRIBUTED

The Committee urged the government to “engage non-government organizations and other members of civil society in the follow up to the present concluding observations.”

Addie Unsi, National Coordinator of E-Net Philippines, noted the large number of out-of-school children and youth, and the “selective admission policies and practices of private education providers which discriminate against the poor, those with disabilities, the indigenous peoples, and low-performing students.”

He recommended the “effective regulation and monitoring of private education providers” in view of the possible negative impacts of privatization to wider access to education.

Earlier in June 2016, the UN Human Rights Council adopted a landmark resolution during its 32ndregular session, urging all States to “address any negative impacts of the commercialization of education,” in particular, by putting in place a regulatory framework and by monitoring private education providers.

Citing this resolution, Rene Raya of ASPBAE, reiterated to Committee members that “commercialization is not just about profits. It cannibalizes and undermines the public education system and engenders segregation in society.”

E-Net expressed confidence that under the new administration of Education Secretary Leonor M. Briones, will lead to meaningful reforms, ensuring the right to education and achieving the SDG targets on education.