After harsh words, Duterte says he’s not angry with US, UN | Global News

After harsh words, Duterte says he’s not angry with US, UN 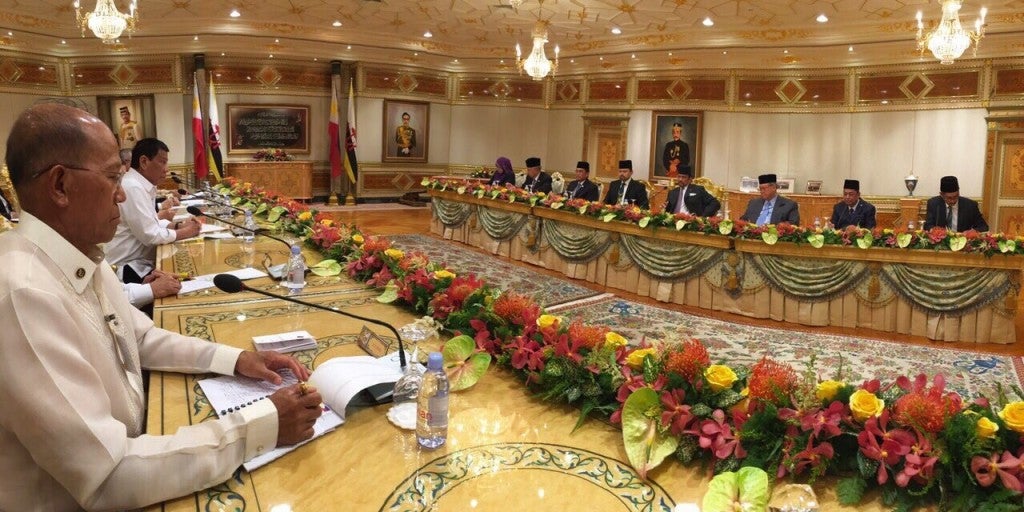 FRIEND OF BRUNEI President Duterte discusses improvement of relations with SultanHassanal Bolkiah at the start of his official visit to Brunei on Monday. CONTRIBUTED PHOTO

After calling US President Barack Obama a “son of bitch,” scrapping annual war games and threatening to sever relations with Washington, President Duterte insisted on Sunday that he was not angry with the United States.

He had also called UN Secretary General Ban Ki-moon and the European Union “fools,” but he said he was not angry with them, either.

If he had cursed them, he said, it was because they were too “dumb” to see his war on drugs from his point of view.

“I’m not angry at them. What I am trying to say—I am ‘totally exasperated’ is the word—[is] that they do not know our laws, that it is not a crime even for a civilian Filipino walking in the streets to say I hate the criminals, I hope they die, I will kill them if I catch them. That statement is in defense of my country and people,” Mr. Duterte said in a speech to the Filipino community in Brunei, where he was making an official visit.

Obama canceled a meeting with Mr. Duterte last month, Ban and the European Union raised concern over the killing of more than 3,000 people in the war on drugs in the Philippines and last week the International Criminal Court (ICC) signaled that Mr. Duterte could face prosecution for incitements to kill.

Mr. Duterte said he found it absurd that his critics continued to threaten him with prosecution in the ICC over alleged extrajudicial killings in his brutal war on drugs.

“How can you send to prison a President declaring war on the drug? I already said I am willing to rot in jail for the Filipino. Don’t you understand that? So why keep on threatening or intimidating me and calling my attention? You’re too corny,” he said.

Even so, Kabayan Rep. Harry Roque cautioned Mr. Duterte about his language.

Speaking in Manila, Roque said there was “no immediate threat of an ICC prosecution,” as the court’s chief prosecutor, Fatou Bensouda, could not launch an investigation on her own.

But Mr. Duterte, he said, should “take proactive steps in the investigation and prosecution of the killers.”

“That is ultimately his defense,” Roque said.

Mr. Duterte, however, acknowledged that there were extrajudicial killings in his war on drugs, but insisted they were not state-sponsored.

“Let’s not fool each other. Some of them (victims) were ‘salvaged,’” he said, using the Filipino slang for extrajudicial killings.

“I will not say there was none, there is. But for you to say it is state-sponsored killing, that I ordered them to kill, that is a joke,” he said.
‘Don’t blame me’
Mr. Duterte said that if his critics wanted him out, they should ask God because it was God who put him in office.

“Don’t blame me. If you’re angry at me and you want to shout at me, shout at God. It is God who placed me here,” he said.

He also said his enemies should not pull a coup d’état because he would not leave Malacañang alive.

“They think they can change [the government]? Who are you to change the choice of the people?” he said.

Mr. Duterte won by plurality in the May 9 presidential election. Over 38 percent of 42.5 million voters picked him, while 61 percent voted for other candidates. —WITH A REPORT FROM NIKKO DIZON