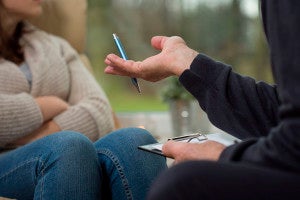 Christopher Reilly, Sierra Vista’s chief of behavioral health services, said he was concerned about the high percentage of patients afflicted, but even more so about the clinic’s ability to treat them.

That’s in part because at health centers like Clinica Sierra Vista, a large group of mental health providers are excluded from reimbursement by Medi-Cal, the government program for low-income Californians.

But that will soon change. Gov. Jerry Brown last week signed a law allowing federally funded health centers and rural clinics to bill Medi-Cal for the services of licensed marriage and family therapists.

“I am ecstatic that this passed,” Reilly said. “It means a lot more people are going to get attention for their behavioral health needs a lot earlier.”

The new law, which takes effect Jan. 1, is designed to address gaps in mental health care, particularly in rural areas where recruiting and retaining behavioral health providers is a challenge.

Under the current law, clinics hire licensed clinical social workers and psychologists for their Medi-Cal patients, but they often can’t find enough to meet their needs. Many clinics don’t provide behavioral health services at all.

About 40,000 marriage and family therapists are licensed in the state, compared to about 22,000 social workers and 21,000 psychologists, according to a state analysis of the legislation, Assembly Bill 1863.

Sierra Vista’s Reilly, who himself is a marriage and family therapist, said he expects another benefit from the law: less reliance on medication. Instead of simply being referred to doctors for prescriptions, the patients will be able to have regular counseling.

Often, Reilly noted, patients’ depression or anxiety stems from family problems, domestic violence or substance use. Marriage and family therapists can help with those situations, he said.

The new law signed by the governor affects nearly 1,000 federally funded and rural health clinics, according to the state analysis. The clinics accept patients regardless of their ability to pay and rely heavily on Medi-Cal reimbursements.

One of them, OLE Health, treats about 25,000 patients each year in Napa. CEO Tanir Ami said it’s been a challenge to find enough social workers to treat patients, many of whom have depression and anxiety, often exacerbated by poverty and inadequate housing.

“Now we get to recruit from a whole other pool of qualified candidates,” Ami said. “I am hoping it will make it exponentially easier to find the workforce we need.”

“If you get people the behavioral health they need, you potentially keep them out of emergency rooms, which is a huge savings,” Wood said.