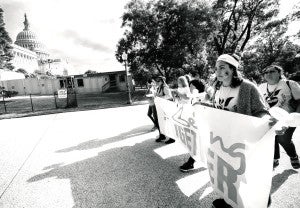 Immigrant women celebrate anniversary of 100 Women, 100 Mile Pilgrimage by marching from the Supreme Court to the White House. HOPE IN FOCUS/Steve Pavey

LOS ANGELES — When Teresita Villasenor moved to the United States from the Philippines in 2001, she secured a job as a caregiver in Sacramento where she worked 24-hour shifts and received $100 per day.

Four years later, she moved to Southern California in search of better paying opportunities as a domestic worker.

At the time, domestic employees in the Golden State weren’t granted overtime protection like most workers in other industries are. And when Villasenor landed a job in Calabasas, she was paid $80 a day per 24-hour shift. 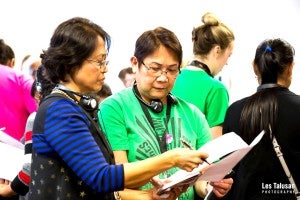 Members of the Pilipino Workers Center at the Assembly. JENNIFER FISHER

But a huge victory came on Sept. 12, when California Gov. Jerry Brown signed into law a bill that requires domestic employers to pay workers overtime if they work more than nine hours in a workday or more than 45 hours in a workweek.

The bill, SB1015, was authored by state Sen. Connie Leyva (Dem-Chino) and built upon existing legislation passed in 2013, AB241, which granted overtime protection for domestic workers but was set to expire on Jan. 1, 2017.

“This portion of our workforce is vitally important as these women and men oftentimes travel many hours to and from work and are away from their own families solely because they are working as privately hired domestic workers in another family’s home,” Leyva said in a statement on Feb. 11.

“Thanks to the day-to-day hard work of domestic workers in California, their employers are able to hold down their own jobs and tend to their family’s other needs,” Leyva added.

“It feels great and very overwhelming, like all our hard work has been paid off,” said Emily Uy, 57, who has been a caregiver since 2008, of the law’s passing. “This victory isn’t just for me, it’s for everybody. It has restored our dignity because we now feel we are part of the working force and we are treated equally these days, so it makes me feel good. Like I’ve done something right, I’m fulfilled.”

Among advocates at the forefront in convincing lawmakers to approve the bill was the Pilipino Workers Center (PWC), a Los Angeles-based non-profit organization that serves the needs of Filipino workers.

When AB241 was signed into law in 2013, the organization conducted studies and research on the impact of the legislation on workers and families. It also participated in one of the first reports on domestic employers.

PWC further worked with the Department of Labor to enforce the law in response to agencies that weren’t in compliance, and assisted domestic workers who weren’t properly compensated file wage claims. 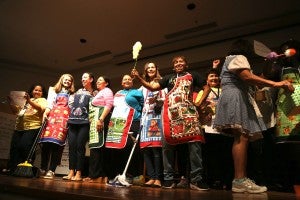 Boosting the visibility of domestic workers was also an important component in getting SB1015 passed. PWC worked with individuals in the Hollywood industry, including comedian Amy Poehler, who was featured in a documentary about the campaign for the new law. The film also featured Filipino and Latino domestic workers.

“And then especially when it was getting really close to the [governor’s desk], it was really critical for us to start to pull together the stories so that he could see how critical it was to make overtime protections permanent instead of just extending it for another three years,” said Aquilina Versoza Soriano, executive director of PWC. “That’s what the homecare agencies wanted.”

After AB241 was implemented, Villasenor said she felt the benefits, particularly that she was able to receive proper compensation whenever she worked more than eight hours. Additionally, she no longer needed to work 24 hours to make the amount of money she made previously, which freed up her time and allowed her to live a more balanced life.

“I’m not very exhausted, unlike before. I’m not cranky because I’m more focused with what my client needs. With AB241, I was able to take some classes. I had my hobbies. I like to sew dresses and bags, and I was able to attend sewing classes at Los Angeles Community College, I was also able to attend first aid and CPR classes that PWC gives. I had more time to myself with my friends and my family,” she said.

But despite the signing of the bill, the fight for domestic workers isn’t over just yet.

“I feel so happy not only for myself but for other domestic workers, whether caregivers or housekeepers. The only thing now is enforcement because there’s a lot of homecare [agencies]. Who knows if they’re going to be enforcing that new law that was signed by Governor Brown? We’re waiting to see if homecare agencies are going to follow,” Villasenor said.