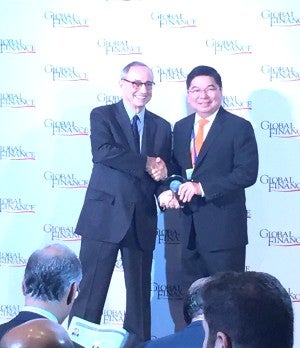 WASHINGTON, DC – Two top financial magazines cited the Philippines and its economic managers as the best sovereign debt management office in East Asia and the Pacific.

Global Finance and Global Markets recognized the country in awards handed out on Oct. 8 in Washington, D.C.

“When the government of the Philippines announces a non-deal roadshow, investors come to listen. When the sovereign issues debt, they buy,” wrote Global Markets in describing its decision to give the award to the Philippines.

The magazine noted that the Philippines was able to build up a “formidable reputation” among global investors as a reliable issuer of sovereign bonds. In turn, the country’s ability to raise capital in the bond market allows it to equally provide for social security and enhance economic growth.

Jose Victor V. Chan-Gonzaga, minister for economic affairs at the Philippine Embassy in Washington D.C., received the award on behalf of the Department of Finance.

Tetangco was one of only eight central bankers around the world who received a grade of “A” from Global Finance in its Central Bankers Report Cards 2016. 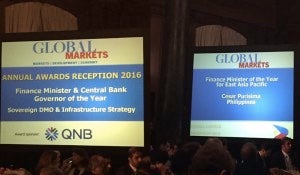 Former Secretary of Finance Cesar V. Purisima was honored as Finance Minister of the Year for East Asia and Pacific at the Global Markets annual awards reception held on Oct. 8. The financial magazine also cited the Philippines as the best sovereign debt management office in East Asia and the Pacific. CONTRIBUTED

The Report Cards are published every year and are an assessment of the central bank governors of key countries. Graded on an “A” to “F” scale, the central bankers are graded in areas such as inflation control, economic growth goals, currency stability and interest rate management.

Aside from Tetangco, also rating an “A” were the central bank heads of Israel, Lebanon, Paraguay, Peru, Russia, Chinese Taipei, and the United Kingdom.

“The Philippines welcomes these awards from Global Finance and Global Markets, which are important voices in the international financial community,” said Minister Patrick A. Chuasoto, chargé d’Affaires ad interim of the Philippine Embassy, in a statement.

At the Global Markets ceremony, former Secretary of Finance Cesar V. Purisima was also honored as Finance Minister of the Year for East Asia and Pacific. Global Markets recognized him for “overseeing six solid years of improved finances in the Philippines and presiding over the fastest growth in the area.”

In accepting the award on behalf of Purisima, Minister Chan-Gonzaga noted how the work of the last six years under Secretary Purisima’s leadership have laid down the foundations for ensuring that the Philippines, under President Rodrigo Duterte, will continue to be a vibrant and dynamic economy in East Asia and the Pacific for many more years to come.

“I am sure that Secretary Purisima accepts this award not only on his personal behalf but also on behalf of all the men and women in the Philippine economic team who worked hard with him in the last six years,” added Mr Chan-Gonzaga.

The Global Finance and Global Markets Award Ceremonies took place on the sidelines of the Annual Meeting of the World Bank Group and the International Monetary Fund in Washington, D.C. on Oct. 5 to 9.