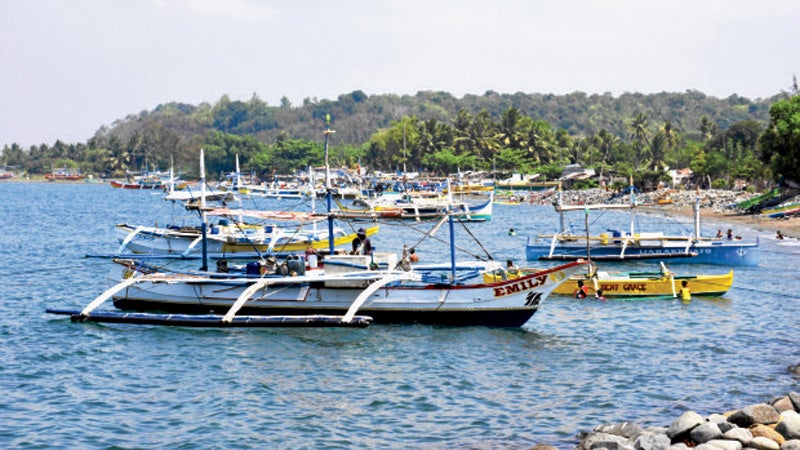 LITTLE CATCH Fishermen driven away from their traditional fishing grounds in Panatag Shoal sort through their meager catch before unloading them at Barangay Cato, Infanta town, Pangasinan province. —WILLIE LOMIBAO

“What happened to the election promise of President Duterte? I thought he was willing to jet ski to Scarborough Shoal to reclaim it from the Chinese invaders?” said Jowe Legaspi, an official of the fishing village of Cato in Infanta town who reported the incident on Monday.

He said the fishermen from Infanta were approaching Scarborough Shoal, known to Filipinos as Panatag Shoal, on
Oct. 3 when Chinese coast guards in a rubber boat blocked their path and shooed them away from the shoal.

The fishermen had no choice, he said, and left to avoid getting hurt, like what happened to other fishermen who tried to fish at the shoal.

He said that in several incidents in the past Chinese coast guards fired water cannons at Filipinos fishermen or rammed the fishermen’s outriggers with their patrol vessels to drive them away from the shoal.

“Why is it getting more difficult for us to go there? We have already won in the United Nations arbitration court,” Legaspi said.

He was referring to the July 12 decision of the UN-backed Permanent Court of Arbitration in The Hague that said China had no historic title to the South China Sea and that it had violated the Philippines’ right to fish and explore for resources in waters within its 370-kilometer exclusive economic zone (EEZ).

Scarborough Shoal is well within the Philippine EEZ but outside its 22-km territorial waters.

The court said Filipino fishermen, like the Chinese, had traditional fishing rights at Scarborough, but did not resolve which country had sovereignty over the shoal.

But China, which claims 90 percent of the South China Sea, rejected the ruling, saying it would not change anything in the strategic waterway.

“We are talking about sovereignty here,” Legaspi said on Tuesday. He said the fishermen told him that they had seen several Chinese vessels anchored in the shoal’s lagoon, something they described as unusual. The fishermen, according to Legaspi, appeared to be drilling in the area.

“They saw stainless steel bars there and these materials could only be used for drilling,” he said.

This new development made Mr. Duterte’s latest statement about Scarborough Shoal “a disappointment,” he said.

Speaking to residents of Lamitan, Basilan province, on Monday, Mr. Duterte said the Philippines could not win in a fight with China over Scarborough Shoal.

Instead of using the Hague tribunal’s ruling as a leverage in talks with the Chinese, he said he would ask them to allow Filipino fishermen to go back to Scarborough Shoal.

Mr. Duterte, accompanied by a large business delegation, will visit China from Oct. 18 to 22.

“I have a good feeling that we will be OK with [China]. But first, let’s not touch the Scarborough issue because we cannot win that,” Mr. Duterte said.

The President reiterated his position in a speech in Malacañang on Tuesday, saying he would not lead the Philippines in a no-win situation with China by asserting its right over Scarborough Shoal, which he described as a “fishpond.”

He said that while the Hague tribunal upheld the Philippines in the case it brought against China, “these are entitlements of that part of the Red China Sea that is ours. But it is not [part of our] territory.”

“Beyond that [territory] is what is ours, like a fishpond. All of us are given a fishpond. You count it from the outermost line then you draw a line there and that’s yours. All of us are like that, but China has claimed it to be part of its historic sovereign territory,” Mr. Duterte said.

He said the Philippines had only two options: Start a war with China over Scarborough Shoal or settle the dispute through bilateral talks.

He said he preferred talks and he expected to get soft loans and trade concessions from China during his visit.

He added that he also expected to get donations for his rehabilitation program for drug dependents.

China has donated a 1,600-room drug rehabilitation center to the Philippines, which will be developed inside Fort Magsaysay in Nueva Ecija.

Speaking at the closing ceremonies of this year’s marine landing exercises between Philippine and US troops at Philippine Marine Corps headquarters in Taguig City on Tuesday, Carpio said the patrols were mandated by the Constitution.

He said there was only one power on earth that could stop the Chinese from intruding into the Philippine EEZ—the United States.

But angered by US criticisms of his brutal war on drugs, Mr. Duterte has said he might break relations with the United States and seek closer relations with China and Russia. —WITH REPORTS FROM ALLAN MACATUNO, GIL CABACUNGAN AND CYNTHIA D. BALANA