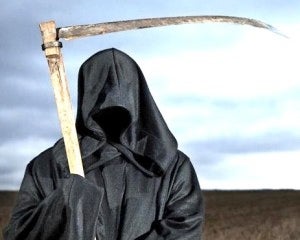 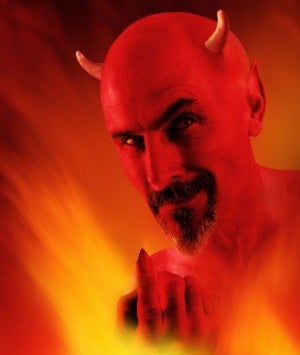 We could very well be in the End Times. On top of the Zika virus and climate change there’s President Duterte consigning the EU to Purgatory because “Hell is filled up” (but has room for President Obama). And in a brute challenge to the Almighty he also wants to “teach God a lesson in justice.”

Are we in the Beginning of Sorrows, the horrific prelude of judging, abominating and smiting–the ghastly eve of the Second Coming? Will the Four Horsemen come in the dead of night? Is President Duterte the Antichri … banish the thought!

I wonder too because of a dark sign, a vile malevolence that has afflicted the populace, including my usually agreeable next-door neighbors who are avid Duterte supporters. Lately, I find myself treading very cautiously whenever I talk to them.

It’s gotten to the point that I must ask them political questions in this manner: Do you think President Duterte should tone it down a bit, or should I just go fuck myself?

“Hang yourself too, bitch, or I’ll do it for you!” the husband snarled. “If you’re not with us you’re against us, yellowtard. Die!”

His sweet wife smiled and said, “Can I borrow a cup of vinegar, asshole? Hey, Junior come here and say hello to Mr. Fuckface. You know, Junior wants to be president someday. Digong is his role model.”

“Putangina niyo, sir. Have a nice day. Fuck you po.”

Something must be awfully wrong when my formerly civilized neighbors start talking like our new ambassador to the United Nations.

As I pondered what malign spirit has seized our political imagination, the first visitation occurred. A doleful stranger appeared in my room, unbidden, at the stroke of midnight. It was the Horseman Death himself!

But, but, I’m not a drug addict or a pusher. I shouldn’t be on his list! I protested, halfway peeing myself.

“Fear not. I’m not here to collect but to ask for sympathy. Truth be told, all this talk of death squads is killing me. My reputation is shot. I need a shoulder to cry on. May I?”

Oh, puh-leeze. When did he ever get good reviews? Could that hooded robe and fearsome scythe have something to do with it? Hello?

“Please understand, I’ve always wanted to be accepted. I’m just a natural phase of the biological cycle, part of the endless flow and conservation of energy from one form of life to another–something to be understood and eventually welcomed, not feared. I’ve tried public relations with the help of scientists, psychologists, Buddhists, what-have-you throughout the millennia, and yet I still suffer from rejection.”

But wasn’t he feeling needed and very welcome nowadays in the Philippines?

“Yes, but in the worst kind of way. Thanks to your zealous President, I’m no longer just Grim, as the Reaper, but also Arbitrary. It’s so unfair to add another unflattering adjective to my title.”

He’s been overworked in the past 100 days of the new administration, he complained. I reminded him that delivering folks to the Underworld was his job description.

“Yes, but why can’t I just pull the plug or bring illness? Does it have to be grisly shots to the head all the time? And I get called only to the poorest sections of town, never to gated communities where some crooks really deserve to be flat-lined. I’m supposed to be an equal-opportunity annihilator, forgodsake.”

A thankless duty indeed, I commiserated.

“And I may have three million more job orders coming,” he sighed.

I tried explaining that we have a sort of failed state, and most people are tired of backlogged courts and corrupt judges. They have no patience, I guess, for slow processes like drug rehab, judicial reform, or poverty reduction. Like junkies a good many want the quickest fix. They want him, Death, to take the place pronto of the ever-equivocating Lady Justice, who’s blind to boot. Sorry, I said, there was nothing I could do to ease his burden. I’m not the President.

“Gotta go, another barangay captain just gave the cops a list of names. Reminds me of the Japanese Occupation.” Death vanished in a puff, muttering only a foreboding “See you later.”

“What a yoooge whiner! Aha, ha, ha, ha!” another unexpected visitor startled me. He was all dressed in red, his eyes ablaze. Why it was Satan. “Lucio Ferrer in these parts, if you wish, LOL.”

I didn’t call you, I objected. Get thee behind me! Why not three other Horsemen?

“Oh, Pestilence is busy spreading Zika, War is in the Middle East, Famine is all over the place as usual. And Death just left. Anyway, I just want to see how a goody-two-shoes human-rights-lover is suffering in these toxic times, mwa-ha-ha.”

You, you have possessed my people, I yelled, wagging an accusing finger at him. You have fed them vitriol, made them viciously intolerant of dissenting voices, I shouted alliteratively to dramatic effect. You have made my neighbors, a well-educated statistician and a medical doctor, behave like medieval Inquisitors.

“Uh, uh. You can’t pin that on me, no sir. Your people are doing it to themselves. They found someone they believe has the will to solve all your society’s woes, and the most fanatical of them want everyone to just shut the—pardon my language–eff up and trust him. Critics like you are a threat to their illusion.”

And that’s why those fanatics are menacing anyone who disagrees with them and their idol, spewing hate both analog and digital?

“It’s an outbreak of populism, and there’s bound to be collateral brain damage. Aha, ha, ha! They drank the proverbial Kool-Aid of blind loyalty. They believe your leader can do and say no wrong – to hell with international isolation and global opprobrium, and I say that with relish. I’ve seen a movie that started like this — in German. Love the Italian and Spanish versions too.”

Before leaving, Satan at least assured me–to my great relief!–that we’re not in the End Times and that President Duterte is not the Antichrist.

He said our President really means well and is single-mindedly paving the road to our future with his good intentions.

“See you later,” he giggled.